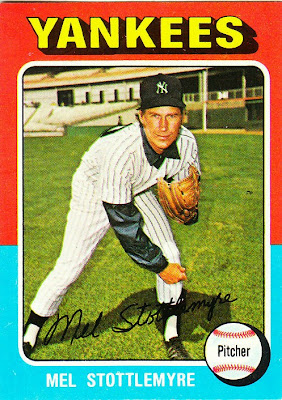 Card fact: This is the final card of Mel Stottlemyre during his playing career. That makes it three straight cards that I have said that.

What I thought about this card then: This was the first Yankee that I ever saw from this set. I know I had the card, but I lost it rather early on in 1975. I probably traded it to some greedy, grubby Yankee fan. I always liked the card. It seemed to have a classic look to it, and its the first Yankee card I think of when I think of this set.

What I think about this card now: It occurs to me that I have never known what Stottlemyre looked like as a young man. By the time I knew who he was, he was at the end of his career. After that, I only knew him as someone who walked out to the mound to talk to pitchers or sat in the dugout.

Other stuff: Stottlemyre made an immediate impact with the Yankees in 1964, pitching in three games in the World Series against the Cardinals that year, his rookie season. He won 20 games the following year, and won 20 games two other times. He was one of the most consistent players on a Yankee team that was not very good between 1965-75.

Stottlemyre also is the father of former major leaguers Todd and Mel Jr. Todd always seemed very hyper to me. 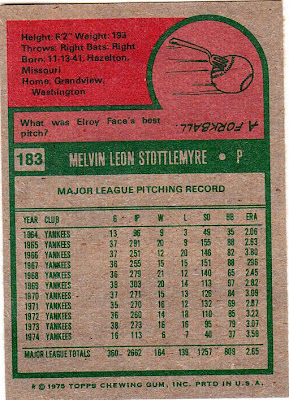 Back facts: I just noticed that a lot of the cartoons appear to be about Pirates. I should go back through and see which team is mentioned the most.

Other blog stuff: The No. 1 song in the country on this date in 1975 was "Another Somebody Done Somebody Wrong Song" by B.J. Thomas. Now that's just being wordy for the sake of being wordy.
Posted by night owl at 2:15 AM

He sure chewed up some innings between '65 and '73. I'm still amazed at the way pitchers are babied now and those guys back in the "day" just pitched and pitched.

Actually, the #1 song that day was "(Hey Won't You Play) Another Somebody Done Somebody Wrong Song." And yes, that's quite wordy...but if you're going to mention that, you may as well include the entire title.

Yet another jacket or windshirt under the jersey. That was quite a thing back then, apparently.

Perhaps the quintessential "Yankee at Shea" shot. All-Time Yankee great out in left field at Shea. Stottlemyre and Don Mattingly are the two "tragic" Yankees, having great careers at the two times in the last 100 years when the Yankees were lousy. At least Stottlemyre got into one World Series.