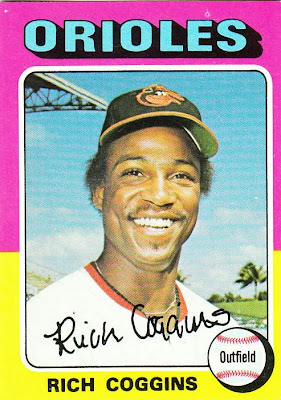 Card fact: This is the middle card of a three-card Topps trilogy that spanned Rich Coggins' brief major league career.

What I thought about this card then: Well, I can't explain it, but I thought Coggins looked like a lady, so I will file this under the "dude looks like a lady" column. I don't know why I thought that. His hair isn't long. Maybe it's the way it sticks out? Maybe the smile looked motherly to me? I don't know. Kids are weird.

What I think about this card now: This may be the biggest smile in the entire set. I'll have to do some research on that.

Other stuff: Coggins finished sixth in the American League Rookie of the Year voting in 1973. His teammate, Al Bumbry, finished first. Coggins is probably best known for being a part of a lopsided trade that brought Ken Singleton and Mike Torrez from the Expos to the Orioles. Coggins and Dave McNally went to the Expos.

Later, Coggins developed a thyroid condition and his career was over by the end of 1976. 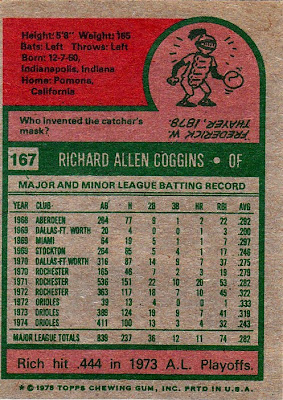 Back facts: Fred Thayer developed the first catcher's mask for a player on the Harvard baseball team. The mask soon caught on everywhere and the tools of ignorance were born.

Other blog stuff: The pink-yellow combo is on quite a run lately. The "marshmallow peeps" combo is now the third-most common combo with 12 cards.
Posted by night owl at 2:28 AM

Catcher's masks and goalies masks....two of the best inventions in sports. Well, not as great as the "cup", but close.