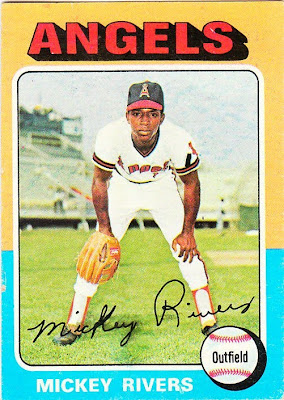 Card fact: Is there a name that goes better with baseball than "Mickey"?

What I thought about this card then: I didn't see it. The 1976 card of Rivers pretending to look up for a fly ball is the first Rivers card I ever saw. And Rivers was a Yankee as far as my childhood was concerned.

What I think about this card now: The standard player photos of the day really failed base-stealers. These players, more than any other, seem like they should be moving. But Rivers ain't going nowhere in that photo.

Other stuff: "Mick the Quick" was a regular part of my upbringing. We would watch him every weekend (we only caught games on TV on the weekend when I was growing up) and laugh as he shuffled from the on-deck circle to home plate like he was the oldest man in the world. I remember Phil Rizzuto being particular amused by him while broadcasting the games.

I had a difficult time disliking Rivers, even though he was part of those hated Yankee teams of the late '70s. He just seemed so comical. And I had a weakness for base stealers. Rivers was probably the fastest guy ever to play for the Yankees.

Rivers came to the Yankees in the trade for Bobby Bonds. He was with New York for only three-plus years before getting traded to the Rangers. He had a great season for Texas in 1980 and then faded after that, retiring after the 1984 season. 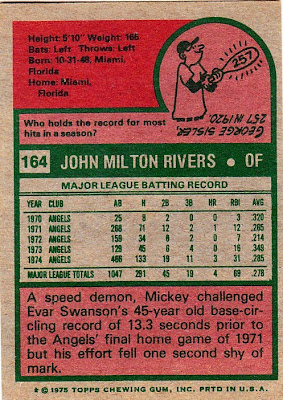 Back facts: Evar Swanson STILL holds the record for the fastest recorded time around the bases. Swanson was an infielder for the Reds when he set that record in 1929. He was timed during a special session, not during a game. Rivers also was timed prior to a game. I'm quite sure the only reason the record hasn't been broken in 81 years is because no one has set out to break it. It's probably been broken during games many times, but I don't know if anyone is clocking players' times around the bases then. At least not for official record-keeping purposes.

Also, Sisler no longer holds the record for most hits in a season. That'd be Icheeeeerrrrrow.

Other blog stuff: I wrote briefly about the Rivers card and its Fan Favorite equivalent on my other blog, for those of you don't read the other blog.
Posted by night owl at 1:22 AM

I only remember Mickey as a Ranger...I block out the Yankee time.

Also, there ISN'T anyone that partakes in this fine blog that doesn't partake in the other. That's my prediction anyway.