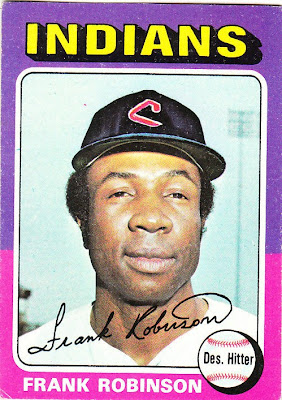 Card fact: This is the second appearance of Frank Robinson in the 1975 set. He's also featured as the manager on the Indians team card. I'm pretty certain that would have blown my mind as a kid, but I never saw this card of Robinson.

What I thought about this card then: See above.

What I think about this card now: Robinson is airbrushed into his Indians cap. He was dealt from the Angels to the Indians in September 1974.

Other stuff: I forgot to mention above that this is the final card featuring Frank Robinson as a player (except for all the retro cards of the last decade or so). Robinson was named player-manager by the Indians on Oct. 3, 1974. From that point, he was featured on cards as a manager, a second career that would last all the way until a few years ago.

Robinson, of course, is one of the greatest players of all-time, a 500-plus home run hitter, an MVP in both leagues and one of the last Triple Crown winners (1966) in major league history. He played in five World Series. For awhile there, I'd be willing to say he was the most underrated superstar of the last 60 years. I think he's received a little more attention recently, but probably not enough.

Robinson's greatest feats came with the Reds and Orioles (he was famously declared "old" when he was traded from the Reds to the Orioles), but he also played for the Dodgers, Angels and Indians. He came to the plate 185 times as a player-manager for the Indians in 1975-76, getting 43 hits (.232 avg) and hitting 12 home runs. 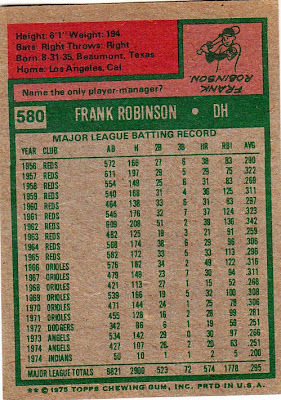 Back facts: These players with a ton of stats really do a number of the clarity of the cartoon question. I believe the question intended to say "Name the only player manager in the major leagues today."

Other blog stuff: Dodger flop Daryle Ward was born on this date in 1975.
Posted by night owl at 12:50 AM

Plus, the trivia question isn't technically a "question."

Would it be an understatement to say that's not the best Robinson card Topps ever did? He's one of those guys my dad would tell me about when I got interested in baseball. I figured if someone impressed my dad enough for him to talk about, then he must be pretty good.

I would still say Frank Robinson is very under appreciated as are his baseball cards.