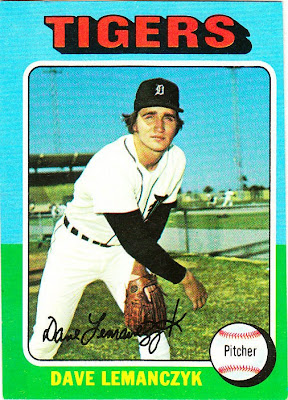 What I thought about this card then: I obtained this card in a trade in 1975. I thought Lemanczyk looked like he was going to cry -- in fact he appears as if he's going to cry on a lot of his cards. I also remember the background of the photo being a lot gloomier than it is. I mean the sun is shining in the photo, but I remember it as being darkness behind him.

What I think about this card now: I'm having a heck of a time spelling his name.

Other stuff: Lemanczyk came up as a reliever and part-time starter with the Tigers. But after he was taken by the Blue Jays in the 1976 expansion draft, he became a regular in the rotation for newbie Toronto.

Lemanczyk now has a baseball school on Long Island. 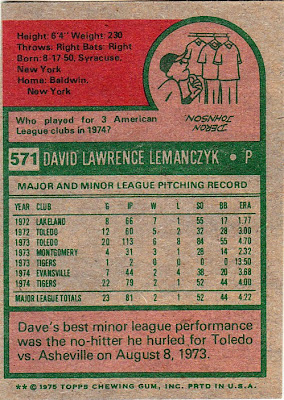 Back facts: Lemanczyk was born in Syracuse, which automatically made me look up where he went to school. He attended high school at Westhill, which I know well, and went to college at Hartwick, which I also know well. There aren't a ton of major leaguers from Upstate New York, so every one is special.

Also, I like how Deron Johnson didn't get a card in the '75 set, but he did get a cartoon.

Other blog stuff: On this date in 1978, the Reds' Tom Seaver pitched the only no-hitter of his career. This, no doubt, frustrated Mets fans, who are still waiting for the franchise's first no-hitter.
Posted by night owl at 12:55 AM

I wonder why they left Johnson out of the set even thought he got into 110 games in 1974. Topps must have gotten tired of airbrushing his picture so they just left him out.

We've talked about Deron Johnson's absence from the set a few times previously. I think the main reason he didn't have a card is that Boston released him shortly after the end of the '74 season, and he wasn't with any team at the time the 1975 set went to print.

We've encountered a few exceptions, but it seems to have been Topps' standard operating procedure in this era not to include any player who had been released and hadn't yet caught on with another team. You couldn't be in the set if you didn't have a team. The details of Johnson's 1974 season -- three teams, .171 batting average -- couldn't have encouraged Topps to go out of their way to include Johnson in the set anyway. Johnson would return to the Topps set in '76.

I've been waiting for one of these guys to have the same birthday as me. Missed by one day.

I feel bad he made one All-Star game and didn't get in the game. I wonder how many guys that's happened to before, but not enough to look it up.

The wait is over. Johan Santana pitched a no-no today.