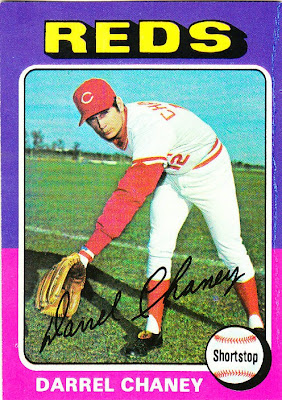 Card fact: Darrel Chaney is one of only two major leaguers to spell his first name like that. The other is Darrel Akerfelds, a pitcher for the Phillies and Indians, among other teams. I know this is a player fact, not a card fact. But it's all I've got.

What I thought about this card then: I didn't see it. But my brothers and I were absolutely horrified by his 1976 Traded card. Mercy.

What I think about this card now: This was one of my more beat-up cards in the set at one point. I've upgraded, but there's still an annoying streak going down the right side of the card.

Other stuff: Chaney was known as a good-glove, no-hit infielder for the championship Cincinnati Reds. He mostly backed up shortstop Dave Concepcion, who knew a thing or two about fielding himself.

After serving in Vietnam in the late '60s, Chaney played seven seasons with the Reds, appearing in three World Series and winning one. He was dealt to the Braves after the '75 Series and enjoyed his first season as a starter at shortstop. He did fairly well in '76, but couldn't hold on to the starter's role. After 3 more years, he was released by the Braves in '79.

Chaney later did some broadcasting work with Atlanta. 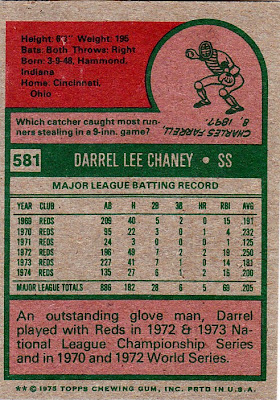 Back facts: Regarding the cartoon question: After about the sixth unsuccessful stolen base attempt wouldn't you call it a day?

Other blog stuff: The late, great Gilda Radner was born on this date in 1946. As a kid, when I had a chance to sneak a peak at Saturday Night Live, the comedian who made me think that this skit show was something strange, weird and amazing was not Belushi, Akroyd or Murray. It was Radner. I wish I knew what skit she was in that struck me, but I do remember thinking: "So. This is adult humor. I don't get it. But it's funny."
Posted by night owl at 1:05 AM

I may need some counseling after clicking on that link for the Traded card. Whoever chose that photo should still be serving federal time for forcing that on collectors.

We need more catcher cartoons! I guess those 1800's ballplayers were pretty stubborn.