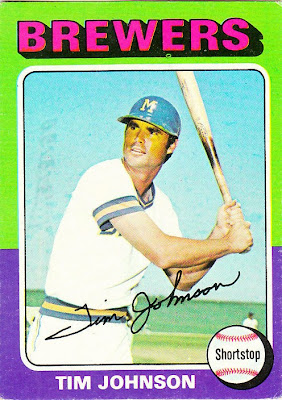 Card fact: There are two players listed as playing shortstop for the Brewers in this set. The other is Robin Yount.

What I thought about this card then: I had the mini card. I thought Tim Johnson looked mean. Like a strict math teacher. With a helmet.

Other stuff: Johnson came up in the Dodgers organization and spent seven years in the minors with L.A. He was traded to the Brewers for Rick Auerbach in 1973. Johnson became the Brewers' starting shortstop that year. But the following year, Milwaukee brought up an 18-year-old Yount to play at short, and Johnson's starting days were done.

After a brief resurgence in '76, Johnson eventually found himself with expansion Toronto. He played as a backup for two years, ending his career after the 1979 season with a .223 batting average.

Johnson later moved on to managing. He was the Blue Jays' manager in 1998 and part of 1999, leading Toronto to a decent '98 season. He famously confessed to lying about serving in the Vietnam War, when in fact he was in the Marine Corps Reserves throughout the war. Johnson used his stories about being on the battlefield to encourage his players, but he let out the truth during some interviews. The Blue Jays stayed by Johnson, who made apologies to multiple players, but the '99 season did not start well, the story wouldn't die, and Johnson was dismissed.

He later continued managing, mostly with independent teams through 2010. 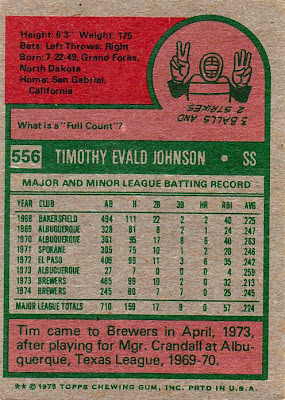 Evald? You can call up Johnson's stats on baseball-reference.com by just typing his middle name in the search field.

Tim's offensive stats in 73 show why the Brewers would go with a teenage Robin Yount the next year.
Tim wasn't much better than rick auerbach who was the ss two years prior.

I was going to comment on "Evald" too, but MJ just beat me to it. By two days.

Just for kicks I asked my wife the question on the back "What's a full count?" She just stared at me and walked away. She just doesn't get the greatness of '75 Topps.