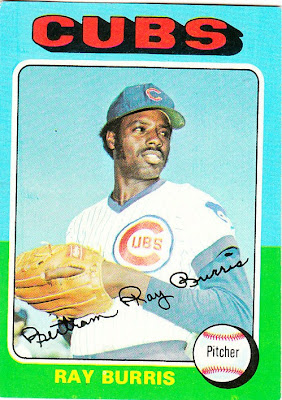 Card fact: Ray Burris' full name of "Bertram Ray Burris" appears in his signature on all of his cards in which a facsimile autograph is featured. Because it is so long, it makes for some interesting cards. His 1982 Topps card shows the signature sideways from the bottom of the card to the top.

What I thought about this card then: I didn't see a Burris card until the 1977 Topps set.

What I think about this card now: It is probably the most miscut card in the entire set, and I need to upgrade.

Other stuff: Burris was a starting pitcher for 15 seasons in the majors from 1973-87. He pitched for some poor teams, specifically the 1970s Cubs and the late-to-early 1980s Mets. But when he landed with Montreal  in 1980, he was part of solid team that came very close to the World Series in 1981.

Burris was the starting pitcher in that fateful Game 5 of the NLCS against the Dodgers. He allowed just one run in eight innings and left the game with it tied 1-1. Of course, the Dodgers would go on to win the game and the series on Rick Monday's home run off of Steve Rogers.

Burris later pitched for Oakland, St. Louis and Milwaukee. After taking a job as a pitching coach in Milwaukee, he actually returned to the mound for the Brewers in 1987. When his playing career was officially done, he became a coach and worked in the front office. Most recently, he's been a pitching coach in the Tigers organization for Double A Erie. 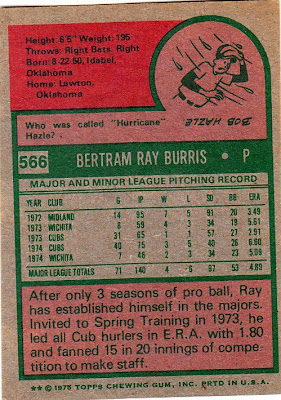 Back facts: Burris spent most of his career as a starter, but one of the seasons when he was mostly a reliever was in 1974. He started just five of 40 games (Burris also relieved quite a bit in 1982-83 for the Expos).

As I kid I remember thinking that Ray Burris was going to be the next Fergie Jenkins.

Back when I was a teacher, one of my students gave me a ball signed by Burris. He appeared at some baseball camp the kid attended. I still have it somewhere. The ball, not the kid.