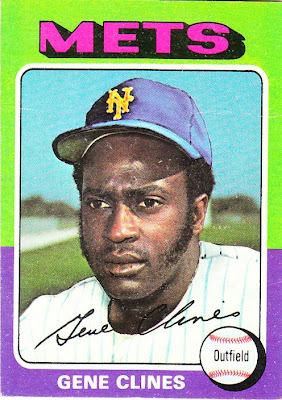 Card fact: Gene Clines is airbrushed into a Mets cap and uniform after being traded from the Pirates to the Mets on Oct. 22, 1975. The Pirates acquired catcher Duffy Dyer in the deal.

What I think about this card now: Clines had some mean sideburns. They grow even more impressive on his later cards.

Other stuff: Clines came up with Pittsburgh, and his best assets were his speed and defense. He played a part-time role on those perennial pennant-winners. His best season came in 1972 when he hit the crap out of the ball (.334/.369/.421). But he fell quickly after that and was dealt to the Mets.

From there, Clines skipped around from the Mets to the Rangers to the Cubs. His final season was with Chicago in 1979.

Afterward, Clines became a hitting and outfield coach for a number of teams, including the Cubs, Astros, Mariners and Giants. His stay with the Giants coincided with their trip to the World Series in 2002 and Clines was featured prominently, considering that Barry Bonds was one of his "pupils."

Clines is now a senior adviser for Player Development with the Dodgers. His main role is to assist the best Dodgers hitting prospects. 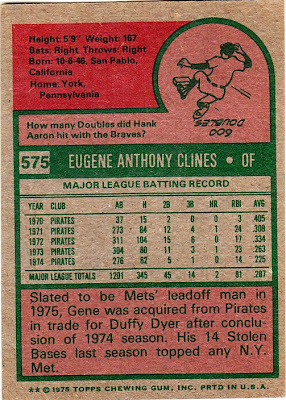 Back facts: I think Topps is being a little kind giving Clines a card number that ends in "5."

Other blog stuff: Two very key celebrities of the '70s were born on this date. Kris Kristofferson, who I knew at the time as an actor in sappy movies starring Barbra Streisand, is 75. "The Bionic Woman," Lindsay Wagner was born 62 years ago.

Also, I would be remiss if I did not mention that "The Muppet Movie" debuted on this date in 1979.
Posted by night owl at 1:23 AM

Nothing but love for Kris Kristofferson, the living embodiment of grizzled. His performance as Whistler in Blade is the highlight of a fairly cheesy action/horror movie.

Awful airbrushing, a Ranger(?) I hadn't heard of, and another Aaron cartoon. Plus Topps asks the question as if Aaron wouldn't hit anymore doubles.

Well, Aaron didn't hit anymore doubles with the BRAVES as he was traded to the Brewers following the '74 season.