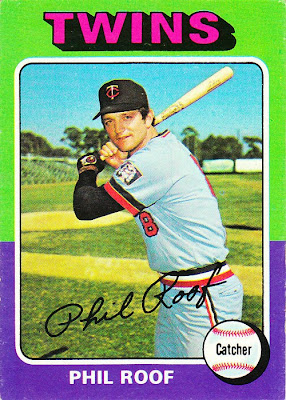 Card fact: Both Phil Roof and his fellow member of the all-construction team, Tom House, feature green-purple borders in this set. Sadly, Hank "the Hammer" Aaron does not have a green-purple bordered card. And Lenny "Nails" Dykstra was only 12 in 1975.

What I thought about this card then: I didn't see it. I didn't know who Phil Roof was until about 10 years ago.

What I think about this card now: The same thing I think when I see any Phil Roof card: how did this guy hang on for so long?

Other stuff: Roof was your definition of a backup catcher. He played from 1964-77 in the major leagues and except for a couple of years with the Kansas City A's in 1966-67, he was a supporting player. His lifetime batting average is .215. Except for the 1975 season when he hit .305 for the Twins, his best batting average in a season was .235.

So, it stands to reason that he was a pretty good defensive catcher. Roof played for not only the Twins, Kansas City and Oakland, but for the Milwaukee Braves, the Angels, the Indians, the Brewers, White Sox and expansion Blue Jays.

After his playing career, he was a manager in the Twins organization for two decades, retiring after the 2005 season. He appeared briefly as the bullpen coach for Minnesota this season. 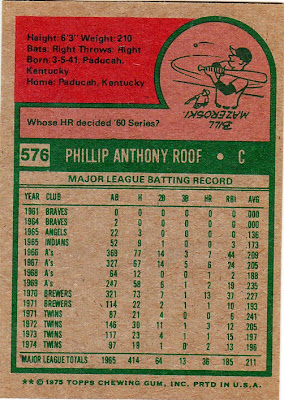 Back facts: You just don't see a lot of guys having back-to-back sub .200 seasons in the major leagues these days. Or maybe you do. I'm not really keeping tabs on the backup catchers.

Other blog stuff: A happy 51st birthday to former Astros pitcher Jim Deshaies, one of my favorite interview subjects and a favorite announcer in the Houston area.
Posted by night owl at 12:53 AM

What about Jack Bro"Hamer" and Larry "Drill" Biittner? Sorry, I don't have much to say about Mr. Roof.

I had the chance to meet Phil Roof and his brother Gene (former Cards player) at a Illinois college baseball game. There were three Roof sons playing, one for Illinois and two for Michigan State, I believe two were Gene's one was Phil's. Nice fellow, nice family.

Roof is a candidate for my Backup Catcher Hall of Fame. Backup catchers are my specialty.
Deshaies is great. I met him on the field at Minute Maid and we talked for a few minutes.

night owl, I think guys like Phil Roof hang on due to their glove, and likely due to some strong ex-catcher presence in the decision making. Old baseball farts love good catchers. To some, like Mike Scioscia, a good fielding/game-calling catcher is worth a dozen 30 home run hitting outfielders. At least, that's the reason Scioscia keeps saying he keeps Mathis around.