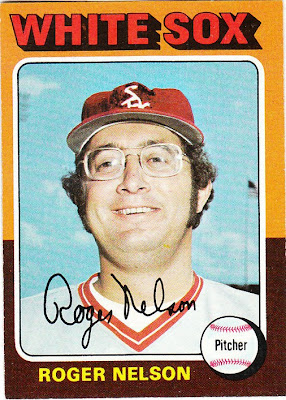 Card fact: This is the final Topps card of Roger Nelson's career.

What I think about this card now: Where to begin? This does not look like a man who played major league baseball. And what is that insignia on his melted cap, a treble clef?

Other stuff: Nelson never pitched for the White Sox after he was traded to them in October 1974. In fact, he was released by the White Sox in March of '75, probably before a lot of kids pulled his card out of a pack that year.

Nelson came up to the majors as a member of the White Sox. Then after a visit with the Orioles, he was selected by the Royals in the expansion draft. He became a key part of Kansas City's first starting rotation, going 7-13 with a 3.31 ERA.

Nelson didn't do much the next two years, but had a 2.08 ERA in 34 games in 1972 for K.C. That enabled the Royals to trade him to the Reds for Hal McRae. Nelson had two mediocre years for the Reds, then bounced around between the White Sox, A's and Royals until 1976. 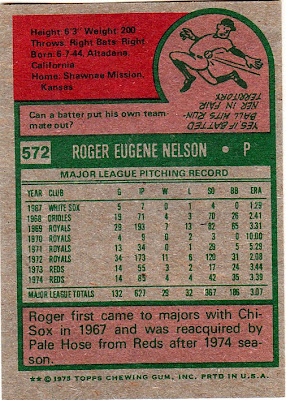 Back facts: Topps makes a valiant effort in the write-up, but it's all for naught as the White Sox went and released Nelson.

Cards That Never Were said...

I like the comment that he doesn't look like a major leaguer. All I can say is Paul Reushel. Or as John Kruk put it "I ain't an athlete, lady. I'm a ball player."

I thought that was composer Randy Newman. Seriously. Do a google search on images for Newman. You'll see.