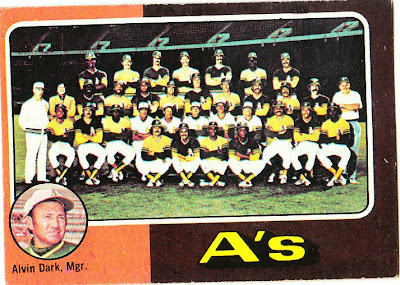 Card fact: The A's had the best damn team cards in history. You cannot argue this point without showing your bias. Best. Damn. Team. Cards.

What I thought about this card then: As you know, I didn't think much of team cards as a kid, but I'm sure I thought this was slightly cool.

What I think about this card now: I wonder how much time it took the photographer to line up the players in alternating uniform colors? Or did they have it down to a science since they did it every year?

Other stuff: Alvin Dark makes his first appearance with the Oakland A's as he replaced Dick Williams as manager for the 1974 season. Dark would lead the A's to their third consecutive World Series title. He would last until the end of the '75 season, getting fired by Charlie Finley after the A's lost in the ALCS to the Red Sox.

Dark was in his fourth of five major league managing stints. He also managed the Giants (he was the third manager to lead teams from both leagues to the World Series), Kansas City A's, Indians and Padres. Dark is the oldest surviving manager of a World Series-winning team. 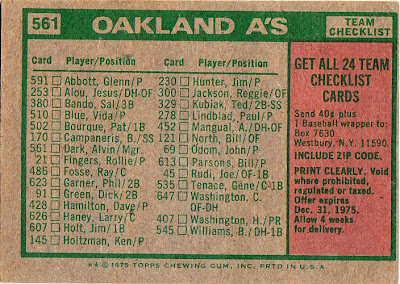 Back facts: Many familiar names there, but of course I get the biggest kick out of "Washington, H./PR"

Other blog stuff: Let's see how well Topps represented the World Champions of 1974 in the '75 set.

Oakland used 36 players in 1974. Topps featured 27 of those players in the set, including Darold Knowles airbrushed into a Cubs cap. It also featured Billy Williams as an Oakland A, even though he didn't play for them in 1974.

Topps didn't skip any major contributors to the A's team, but there is one player who played quite a bit in '74 who did not get a card in 1975.

Deron Johnson began with the A's and played in 110 games total in 1974. He was dealt from Oakland to Milwaukee in June of 1974 (for Bill Parsons, who did get a card). Then, in September, he was purchased by the Red Sox and finished the season in Boston.

Topps must have either thrown up its hands at Johnson's ever-changing team ways, or it was scared off by his .171 average in 351 at-bats. The thing that I find amusing is Topps did feature Johnson as a Red Sox player in the 1976 set. But the Red Sox released him in October of 1975 before the '76 set even came out. Johnson played for the White Sox for most of '75 before getting dealt back to the Red Sox at the end of September. Topps wisely chose not to feature him in the 1977 set.

Anyway, Topps featured 75 percent of the team in its 75 set. Here is where the A's rank:

We've encountered a few exceptions, but it seems to have been Topps' standard operating procedure in this era not to include any player who had been released and hadn't yet caught on with another team. You couldn't be in the set if you didn't have a team. (The details of Johnson's 1974 season -- three teams, .171 batting average -- couldn't have encouraged Topps to go out of their way to include Johnson in the set anyway....)

Today, we're accustomed to the idea that during the offseason there will be guys who don't have a team at the moment, but this doesn't mean they won't play in the upcoming season or aren't deserving of being included in a baseball card set for the upcoming season. Sometimes it takes free agents a while to get a deal. Sometimes teams let players go for purely financial reasons. If the player doesn't have a new team yet, you just show him with his old one. In the days before free agency and arbitration, by contrast, a team could essentially control a player forever, so it didn't really make sense to release him unless he was perceived as having virtually no value. For a player to not be on any team during the offseason marked him as a very marginal player, probably not worthy of being included in a baseball card set. It didn't make as much sense to just show him with old team.

Johnson was released by Boston in June 1976 and was never picked up by another MLB team, so there would have been no reason to consider including him in the '77 set.

My '68 Alvin Dark is my most requested trade card (bad wording) on the Diamond Giveaway sit.