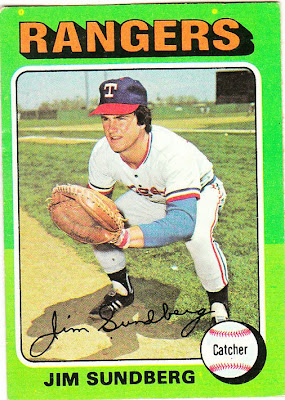 What I thought about this card then: I didn't see a Sundberg card until his 1977 Topps card.

What I think about this card now: Sundberg was one of those guys who seemed to look the same no matter what year it was or how long he had been in the majors. Unchangeable.

Other stuff: When I was a kid, I would only hear about Sundberg from TV broadcasters. The Rangers were never on TV, except when they played the Yankees. But during the Game of the Week and This Week in Baseball, I would hear about the catcher from Texas being one of the best catchers in the game. I'm sure Joe Garagiola, who always talked up catchers, mentioned him a lot.

Sundberg is known as one of the best defensive catchers to have played the game. He played from 1974 to 1989 and won six straight Gold Gloves between 1976-81. Sundberg was a fairly decent hitter, especially during the peak of his career. He tailed off offensively in the early '80s.

The Rangers dealt him to the Brewers after the '83 season. Then Sundberg was traded to the Royals ahead of the 1985 season. He was the primary catcher for Kansas City when they won the World Series. Sundberg later played for the Cubs and the Rangers again.

After his career, he was a TV broadcaster and now works as a VP of public relations for the Rangers. 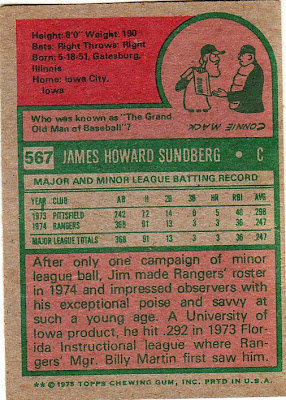 Back facts: One of the longer write-ups that you'll see in the set. Topps was really tested by guys who had just a year or two in pro ball.

Other blog stuff: While looking up "on this date" items, I always come across airplane crashes. Plane crashes, I have noticed, don't happen nearly as often as they did when I was growing up. It used to be commonplace in the '70s and even '80s to read about large plane crashes maybe 7-8 times a year, many of which happened here in the U.S. I've done absolutely no research on this, but they don't seem to happen nearly as often anymore, which is terrific. I don't remember this being publicized -- I'm sure some airline has, though.

Sorry about that detour. Baseball-reference is acting loopy and that's the best that I could do.
Posted by night owl at 12:47 AM

Sunny is one of my all time favorite Rangers. He still appears quite often on the Rangers post game shows and can be seen in person at many games on the Fox Sports Southwest set after games.