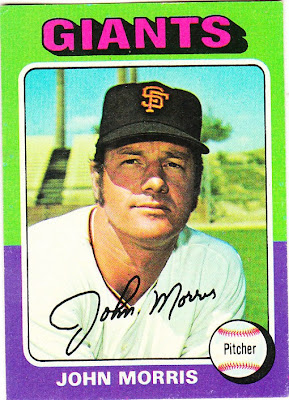 Card fact: This is the last card issued during John Morris' career. He had only three Topps cards and the one previous to this one is in the 1971 set.

What I thought about this card then: I had/have the mini card. I thought Morris was 48 years old. He was actually around 33.

What I think about this card now: He still looks a lot older than 33.

Other stuff: Morris, not to be confused with the outfielder who played for the Cardinals in the late '80s/early '90s, pitched for five teams between 1966-74. His best success came with the Pilots/Brewers between 1969-71. Morris was selected in the expansion draft of '68 from the Orioles. 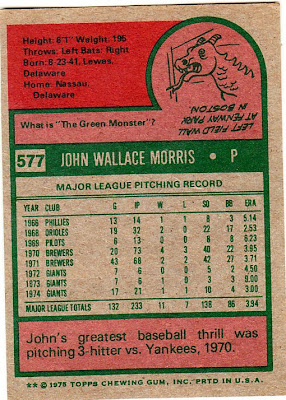 Back facts: The "green monster" is one of my favorite cartoons from this set. Also, the back of this card looks unusual without an orange crayon scribble across the monster drawing. My original mini of Morris (I've since upgraded) has the orange scribble, and it's become as much a feature of the card as the green-on-red type.

Other blog stuff: This is the third straight green-purple bordered card. Except for subsets, this is the first time the same color combination has been featured on three straight cards. The streak has pushed the green-purple combination within one of the overall lead.
Posted by night owl at 1:01 AM

It's hard to believe the Phillies were able to get veteran relief specialist Dick Hall from the Orioles for John Morris prior to the 1967 season. What had Morris done to be worth that much?

I don't remember this Green Monster cartoon. It's freakin' AWESOME!

I'm with Eggrocket. No offense to Mr. Morris, but that cartoon is the best thing about the card.