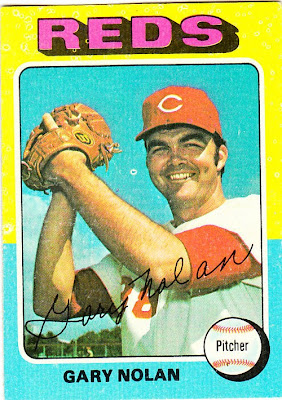 Card fact: Gary Nolan received a card in the set even though he missed the entire 1974 season after shoulder surgery. He also barely pitched in 1973, appearing in just two games.

What I thought about this card then: I didn't see it. But Nolan was one of those inexplicable favorites of mine when I was a kid. Inexplicable because 1) he was a Red, and 2) I had no idea who he was.

What I think about this card now: It's a classic. But I'm wondering how old the photo is considering he hadn't had a full season since 1972.

Other stuff: Nolan was a hard-throwing phenom who appeared in the major leagues as a 19-year-old after being the Reds' number 1 pick in 1966. Nolan struck out 206 batters in 226 innings and went 14-8 in 1967, finishing third in the Rookie of the Year voting.

By the time he returned in 1975, he was a control pitcher with admirable accuracy. He won 15 games in back-to-back seasons as the Reds won the World Series each year. But arm troubles occurred again, Nolan was traded to the Angels, and he retired in 1978.

Nolan became a casino dealer in Las Vegas after his playing career, and later a casino host at the Mirage. He recently patched up a falling out with the Reds and returns for Cincinnati hall ceremonies. 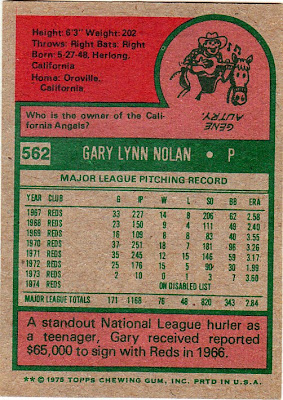 Back facts: I'm sure the cartoon would have thoroughly confused me if I saw it as a kid. Gene Autry's singing career was a dated reference even in 1975.

I'm currently reading Joe Posnanski's book about the '75 Reds (excellent, by the way). Nolan struck out Willie Mays four times in his second career start vs. the Giants at age 19. He claims that prior to the next day's game, Mays approached him and admitted that he had been overmatched.

"Gary Nolan received a card in the set even though he missed the entire 1974 season after shoulder surgery."

That's ok. It was payback for being left out of the 1967 set entirely (including no late-series "NL Rookies" card). As a rookie, Nolan was one of the top pitchers in the NL in '67.

Re: How old is the picture.

He's wearing the button jersey that the Reds last wore in 1971, though the picture could be from spring training 1972, since teams wore old unis at ST. It look like an ST shot with those trees in the background.

So he wasn't the only hard throwing guy named "Lynn Nolan". Lynn Nolan Ryan threw pretty hard too. He didn't have to deal with all those pesky arm issues though.

Ryan's issues were with his fingers, not his arm. While with the Mets, he would get blisters on his pitching hand, and famously soaked his fingers in pickle brine while sidelined between appearances.