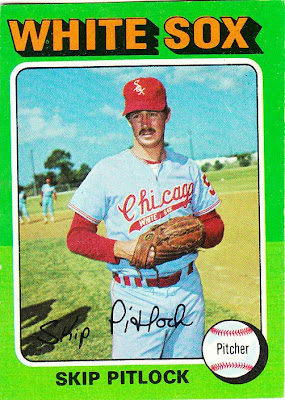 Card fact: This is Skip Pitlock's second and final Topps card. His other card is in the 1971 set.

What I thought about this card then: No knowledge of it. I didn't have any knowledge of Pitlock either until I acquired this card while completing the set in 2004.

What I think about this card now: The slanted background returns. And those shadows in the bottom left corner look slightly ominous.

Other stuff: Pitlock would pitch to just one more major league batter after this card was issued. He faced Billy Williams of the A's in 1975, giving up a run-scoring single.

Pitlock came up with the Giants and was a starter in 1970, going 5-5. He spent the next three full seasons in the minors, two in the Giants organization and one in the White Sox organization. When he returned to the majors in 1974, he was a reliever, appearing in 41 games for Chicago.

Pitlock was traded to the A's in June of '75 in the deal that landed the White Sox Chet Lemon. Pitlock retired after the 1976 season. 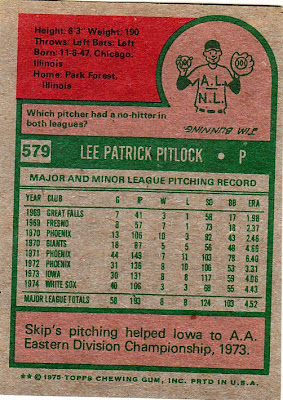 Back facts: It seems to me that the trivia question in that cartoon would be tough to illustrate, which probably explains why you see what you see there.

Other stuff: The green-light green border combination reties the orange-brown combo for the overall lead with 49 cards each.
Posted by night owl at 12:43 AM

That's more like it. Back to the '75s we know and love. He looks worried...maybe it's the slant, maybe it's the shadows, but I think it's the blob faced man behind him. I really dig those White Sox unis.