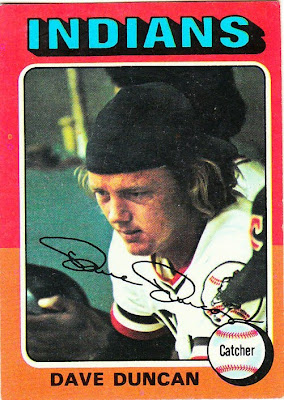 Card fact: There are three players in this photo (although you can see only the cap of one of them). That ties the Rick Monday card for the most players in one photo, so far. Excluding photos with players in the distance. And team cards, of course.

What I think of this card now: What a strange card. Dave Duncan, who looks vaguely like Jay of "Jay and Silent Bob" fame, appears lost in thought. The rest of the photo is dominated by that giant hand in the left corner.

Other stuff: Duncan was your typical good-field, no-hit catcher from the 1960s and 70s. He was much valued behind the plate as a fielder and handler of pitchers. Of course, he used that ability to become one of the most famed pitching coaches of recent history, Tony La Russa's right-hand man for all eternity, apparently.

Duncan has two sons, Chris and Shelley, who have had middling success in the majors. I recently saw Shelley Duncan in an Indians uniform. I had no idea he was with the team. After success with the Cardinals, injuries have plagued Chris, who is now in the Nationals organization. 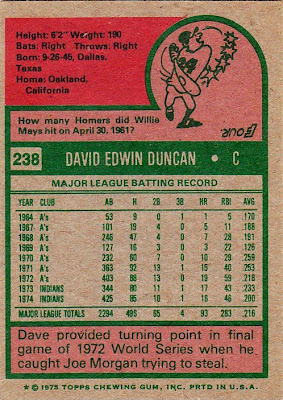 Back facts: How come Joe Morgan never brings up that bio fact during his broadcasts? In Game 7, Morgan was thrown out at second base in the fourth inning of a 1-0 game after walking with one out. The A's would win the game 3-2. "Turning point" might be putting a little too much emphasis on it. Rehashings of that World Series barely mention the play.

Other blog stuff: I'll be taking a break on this blog for a few days. I'll return you to 1975 sometime this weekend.
Posted by night owl at 12:44 AM

If Joe were to cite this fact, it would go against his "I don't believe in Moneyball because it's not true, even though I've never read Moneyball" mantra he brings to the air.

For a a guy who couldn't hit (and a .216 career-to-date batting average would support that) he sure popped off a fair amount of homers.

Enjoy your break! We'll see you on the other side.