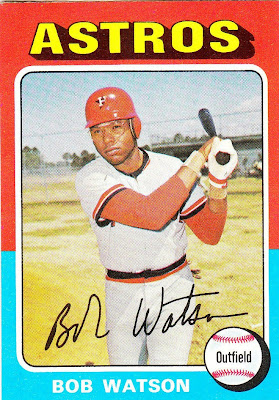 Card fact: This is the first card of Bob Watson to feature his familiar glasses. Apparently he got a prescription filled sometime before the 1975 set came out. They aren't the tinted ones that he wore most of the time, which makes them difficult to see on this card.

What I thought about this card then: This card is burned into my brain, because it is one of the first cards that I ever saw. Unfortunately, I don't have that original card anymore, but I remain very familiar with it.

What I think about this card now: More barren land behind an Astros player. Also, I like that Watson is rocking the black bat.

Other stuff: Watson was a solid offensive player for the Astros for several years before getting traded to the Red Sox and then signing with the Yankees as a free agent. He had a pretty good World Series against my Dodgers in 1981. But we all know who won that one.

The fact cited most often about Watson as a player is that he was credited with scoring the one millionth run in major league baseball history. I've known that since I was young, but I didn't know until recently that Watson also received $10,000 and one million Tootsie Rolls for scoring the run. Later, through updated record-keeping techniques, it was determined he didn't score the one millionth run. Unfortunately, nobody knows who did and who REALLY deserved all those Tootsie Rolls.

Watson was also general manager for the Yankees for awhile, overseeing the team when they won the World Series in 1996. More recently, he's been baseball's vice-president of discipline and VP of rules and on-field operations. So his name pops up every once in awhile during various controversies. 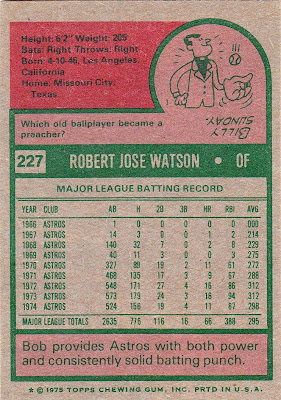 Back facts: Billy Sunday played WAY back -- from 1883 to 1890. So long ago that priesthood probably paid more than being a ballplayer.

Other blog stuff: The first interleague game was played on this date 13 years ago. I'm still not used to it.
Posted by night owl at 1:01 AM

Frankly, "VP of discipline" sounds like a sadistic corporate executive. Or a wrestling name.

I was at the first interleague game (Giants at Rangers). Technically, it started earlier than the others that day. Anyway, I love the color scheme with the card and the Astros uni.

Steelehere nailed it. I can't think of Watson without thinking of "Look! It's Bob Watson and Cesar Cedeno," and "C'mon, let the kids play!"

Interleague is glorified exhibition baseball. Games I pass on whenever I head to Fenway. It only exists to showcase 6 Yankee-Mets games, and for that all other teams deal with an unbalanced interleague schedule. While I'm being cratchety, who cares if the leagues have different rules -it is what makes (made) the World Series, and to a much lesser degree the All-Star Game, a battle of which style/brand was better.