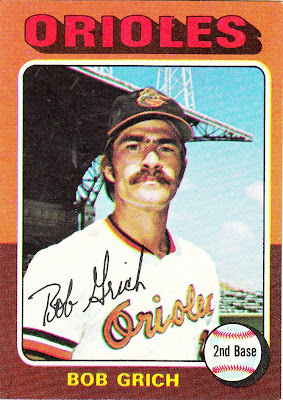 Card fact: This is the first Topps card of Bobby Grich's familiar mustache on prominent display. To me, Grich was the American League's Davey Lopes. Or Lopes was the National League's Bobby Grich. I'm not sure which.

What I thought about this card then: Didn't see it. But the 1976 Grich card was one of my favorites. Grich became one of my favorite non-Dodgers, too, despite the fact that he is pictured cap-less on consecutive cards (1976 and 1977 Topps).

What I think about this card now: I always heard Grich referred to as "Bobby." But I see here on this card that he is "Bob," and his signature is "Bob." I looked at all of his Topps cards, and they all say "Bob." But many of his non-Topps cards list "Bobby." What gives?

Other stuff: Grich was a solid-fielding second baseman for the Orioles and a powerful hitter for his position, especially at that time. I didn't really get to know Grich until after he signed with the Angels -- he was one of the first big free agents, and, of course back then, the Angels seemed to sign about 80 percent of the free agents available. Grich retired after the Angels were eliminated by the Red Sox in dramatic fashion in the 1986 ALCS. That's sad. 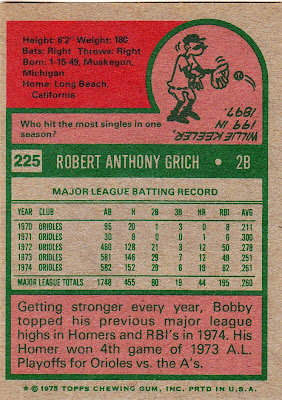 Back facts: Leading a bio with "getting stronger every year," would be a red flag these days.

Other blog stuff: The No. 1 song in the country on this date was "Thank God, I'm a Country Boy," by John Denver. Seeing as that song was played at Orioles games during the '70s and '80s and this is a post on an Orioles player, I think mentioning it is quite appropriate. Yee-haw!
Posted by night owl at 3:10 AM

I have seen the same thing with Richie Hebner. Almost all of his Topps cards refer to him as merely "Rich" but I can never recall him going by that during his career.

Just FYI, they still play "Country Boy" during the 7th inning stretch at O's games. There's even a beer vendor who dresses in overalls and dances.

That's odd, Kevin. I thought I read/saw somewhere that they dropped playing that song. Maybe they dropped it and picked it back up again?

That could explain why the Orioles are so bad. Or it could be the owner.

I just used the phrase "fiery competitor" in conjunction with George Brett, but I feel compelled to do so again here; Grich always seemed overly intense out there and it made me think he was probably a jerk off the field as well.

I'm happy to say that's not the case for him, at least in retirement. I had the pleasure of meeting him recently - very gracious and nice guy.