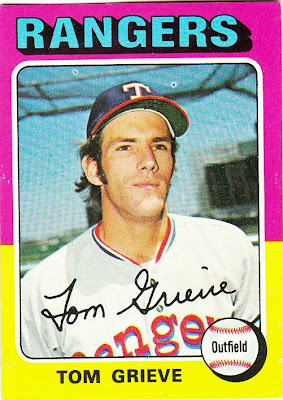 Card fact: Grieve's collection of Topps cards is one of the most uninspired series of photos I've ever seen for one player. He is in almost the same head-and-shoulders shot that you see here for his 1975, 1976 and 1977 cards. And the others aren't all that great either. 1978 is probably the best because he's actually wielding (*gasp*) a bat!

What I think about this card now: Back when I was scanning all the cards from this set for the purposes of this blog, I couldn't wait for the process to be over. It was rather grueling. When I was finally done, I nearly threw a party. Then, several cards into the blog, I realized I had forgotten to scan one card. It was Tom Grieve. So back to the scanner I went. I was grieving over Grieve that day.

Other stuff: Grieve played mostly for the Senators/Rangers, although he was involved in a four-team trade that sent him to the Mets. He ended his career the following season with the Cardinals in 1979. His best season was 1976 when he hit 20 homers and drove in 81 runs.

Grieve became more noted in Ranger land as the team's general manager in 1984. He was on the job until 1994 and is known for acquiring Rafael Palmeiro, but also for trading away a young Sammy Sosa in the deal for Harold Baines.

Grieve is also the father of former major leaguer and 1998 Rookie of the Year Ben Grieve. 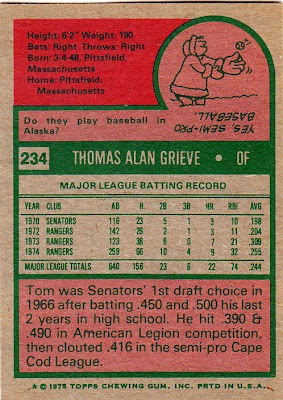 Back fact: Two references to semipro baseball on one card!

Got this off of T.R. Sullivan's blog.

"Jerry Reuss is 61 today. Bring that up because he had a great line once. Tommy Lasorda introduced him to Frank Sinatra once at Dodger Stadium and Reuss said, "I'm sorry...I didn't catch that name?"

Grieve is half of the TV team covering the Rangers now and I really like listening to him.