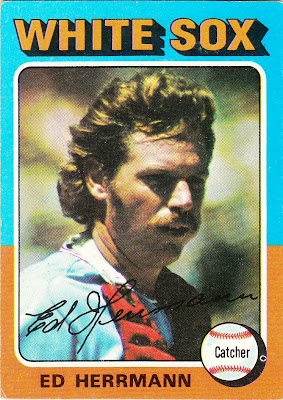 Card fact: This is the first card in the set that shows a player without a cap (excluding the MVP subset). Will it be the only one? I don't know. I'm too lazy to look. I'll just say I want to be surprised.

What I thought about this card then: Didn't see it. No doubt, I would have thought it was cool as it was a rare candid shot.

What I think about this card now: Nice flowing mane there.

Other stuff: My main knowledge of Herrmann as a young collector was repeatedly pulling his 1978 Topps card (then with the Astros). Herrmann was one of those double-printed cards from that year. 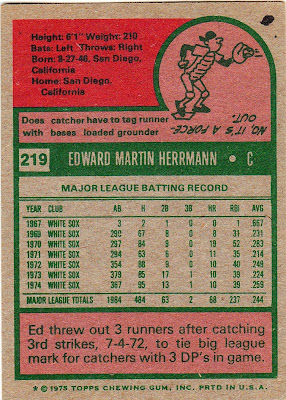 Back facts: The black mark in the top corner is from a marker. I didn't mark it, so I can't tell you more.

I looked up Herrmann's "three double play game" from 1972. It was against the Orioles. The White Sox actually lost the game 2-1. Pat Dobson threw a three-hitter. Dick Allen had the White Sox's only run on a homer in the first inning. Throw in Herrmann's three double plays and the fact that the game was done in 1:54, and that was one awesome 4th of July.

Other blog stuff: The No. 1 song on this date in 1975 was "Before the Next Teardrop Falls" by Freddy Fender. As a kid I always wondered why he suddenly started singing in Spanish in the middle of the song.
Posted by night owl at 12:09 AM

I'm shocked it took that many cards to get a guy without a cap. I'm impressed by any catcher who throws out that many guys in a game. Cool record. I've got his 1971, 1973 and 1977 cards in my Topps MCG portfolio.

You've inspired me to check that box score as well...Dobson struck out 11 White Sox in that game!

Other items of interest (to me, at least): the O's actually hit into FIVE double plays that day. Paul Blair lined to first base and Johnny Oates was caught off the bag, Davey Johnson grounded into a good ol' 6-4-3, and there are the three involving Herrmann. Also, contrary to the description on the card back, only one of Ed's three DPs was a strikeout-throwout (Boog K, Paul Blair CS). Merv Rettenmund hit a comebacker to Stan Bahnsen with the bases loaded and he started a 1-2-3 DP, and then the third DP was a doozy. Brooks Robinson singled to left field. Carlos May gunned down Boog at home, and Herrmann caught Brooks trying to advance to second base!

The Orioles were lucky to win that game, considering that they turned ten hits and three walks into two runs.

Great card. Nice stache, nice sideburns, and it looks like he even has a chaw in his mouth.