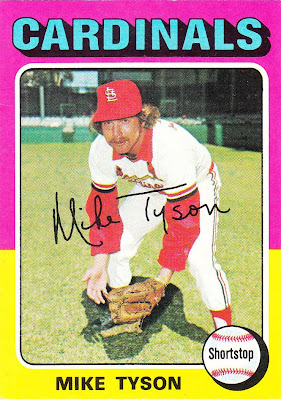 Card fact: This card puts the pink-yellow card combo back in the overall lead with 22 cards so far.

What I thought about this card then: It didn't come my way.

What I think about this card now: It's quite the clash of colors. Pink and yellow and light blue combined with the Cardinals' red uniform. The '75 set really is a fashion faux pas. But it's great.

Other stuff: Mike Tyson was the semi-regular shortstop for the Cardinals during much of the 1970s, a rather unproductive period for St. Louis. Tyson didn't hit much. He was known more for his fielding.

Of course, you're waiting for me to get to the fact that he shares his name with a much more famous, law-flouting, ear-biting, ex-heavyweight champion of the world. Yes he does. And I'm sure Mr. Tyson never tires of hearing about it.

But just to dwell on it a little more, here is Tyson's rookie card: 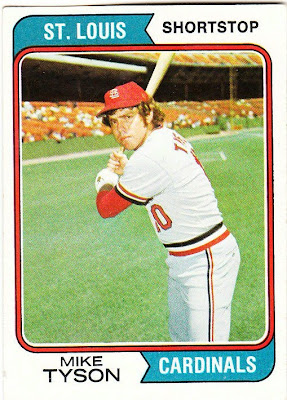 And here is the cartoon on the back (for those who read this once already on the other blog, I apologize): 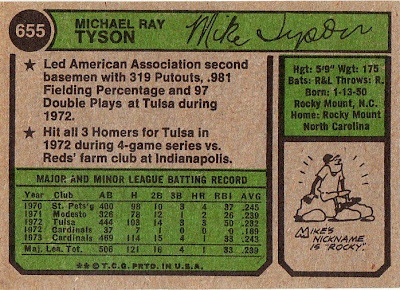 Sadly, Tyson did not become a boxer after retiring from baseball. He's a hitting coach and car salesman according to his wikipedia page. 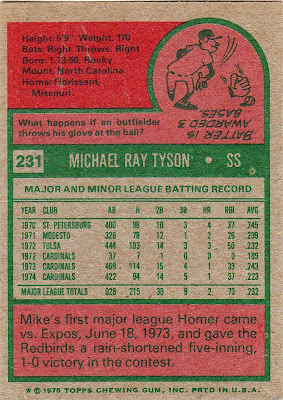 Back facts: How often do you think that rule about throwing your glove at the ball has gone into effect? I bet we'd be surprised at the number of times it's happened. Now, if we included Little League games, I'm sure the number of incidences would be in the millions.

Other blog stuff: The No. 1 song in the country on this date in 1975 was "Sister Golden Hair," by America. My wife says it is a very sad song.

I've never seen that rule called into play. Have you?

"Sister Golden Hair" was a sad depressing song, but so were most of the singer-songwriter type songs from that period. Have you ever really listened to the lyrics to "Seasons In The Sun"? It would make a less stable person want to kill themselves.

I'd be curious to know if that rule has ever been called.

I once met a man actually named Charlie Brown. I commented on it as though I were the first person ever to make the connection. His reaction told me very clearly that I was not, and in dawned on me how tiring it would be to have a name like Charlie Brown (or Mike Tyson). Ever since I made that social faux pas I go out of my way to NOT comment on someone's name if it is the same as someone famous. They've heard all the jokes before. You can't say anything that hasn't been mentioned to them before.

As far as the glove-throwing rule ... I always thought that was just a Little League thing. I remember our right fielder kept getting nailed for that. (You do it once because you didn't know ... you do it twice because you forgot ... but to do it MULTIPLE TIMES? I could never figure that kid out.)

I've seen the glove-throwing-triple rule called in a major league game once in my baseball watching career. A Yankee game some time in the mid 70s. The exact details are foggy in my mind after all these years, but I think it was a game vs. the White Sox and Graig Nettles was involved, but not as the glove thrower.