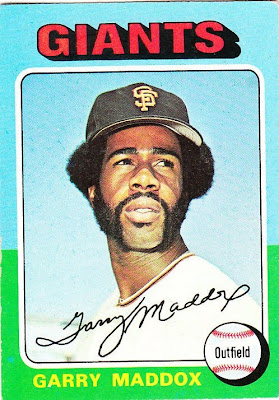 Card fact: This is the first Maddox card with a "hero" card number (one ending in a zero). It's also the last card to feature him as a Giant. Yay!

What I thought about this card then: This, honestly, was one of my favorite cards in the set. I remember pulling it in July of 1975. Maddox seemed so regal, and the card, with its blue-and-green border, added to the effect. I'm not sure what happened to the original Maddox card I pulled. It seems like I would've held on to a card that I liked that much.

What I think about this card now: Thank goodness he's not known for being a Giant.

Other stuff: Maddox was a slick-fielding ballplayer mostly known for his success with the Phillies teams of the late 1970s. He won eight Gold Glove awards, including seven straight. Ironically, Dodgers fans know him most for his botching of Bill Russell's base hit in the 10th inning of the final game of the 1978 NLCS, sending home the winning run and clinching the series for the Dodgers.

Maddox was my favorite player who wasn't on my favorite team and it wasn't just because he helped L.A. reach the World Series in 1978. He continued to be a favorite until the end of his career and I was always happy when I pulled his card.

Maddox is now a chef in barbeque land at the Philadelphia ballpark. 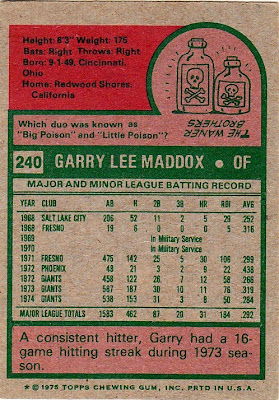 Back facts: I thought it was cool that there were cartoon bottles of poison on the back of the card. It reminded me of Saturday morning cartoons. Someone was always drinking poison on the Looney Toons.

Also, I didn't know what "In Military Service" meant when I was a kid. But it didn't sound pleasant. Maddox served in Vietnam in 1969 and 1970 and exposure to chemicals made his skin sensitive. He grew a full beard to protect his face.

Other blog stuff: On this date in 1975, former Astros player Richard Hidalgo was born. Whatever happened to that guy?
Posted by night owl at 2:03 AM

I don't remember which blogger it is, but someone collects Hidalgo. I'm diggin' those sideburns.

I never noticed before that he spelled his name with two R's.

Maddox was acquired by the Phillies in early-season 1975 for (by then 1st baseman) Willie Montanez. Since Montanez was the replacement the Phillies received when Curt Flood refused to report in that 1970 Dick Allen trade with the Cardinals, it could be said that trading Allen eventually brought Maddox to the Phillies.

In a "circle-of-life" move, trading Montanez to the Giants for Maddox left a hole at 1st base, which was filled by the mid-season signing of Dick Allen!

Garry Maddox is a renowned BBQ chef in Philly, but he most certainly does not have a spot at the ballpark. Bull's BBQ is inside CBP, and is run by Greg Luzinski. Maddox is mainly at festivals and competitions.