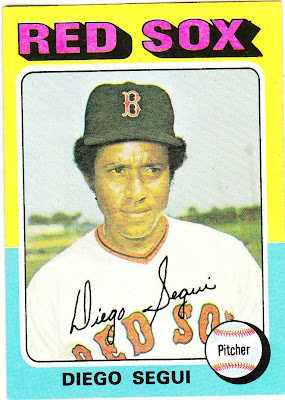 Card fact: This would have been Diego Segui's final Topps card if not for the expansion draft of 1976. After being released by the Red Sox after the 1975 season, he was signed by San Diego. But he never pitched in the majors for the Padres and was signed in the expansion draft by the Mariners. Topps then produced a card of Segui for the 1977 set.

What I think about this card now: Segui seems a little perturbed about something.

Other stuff: Segui had a long career, starting in the majors in 1963. He bounced around between a lot of teams, including a very Rickey Henderson-like revisiting of the A's. He played for the A's in three different periods.

Segui's son, David Segui continued the family tradition and moved from team to team throughout his major league career from 1990-2004. 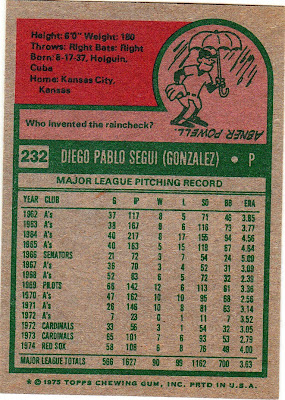 Back facts: To supply a little background that Topps didn't: Abner Powell was a baseball player during the 1880s. He is known more for his innovations surrounding the game, particularly the raincheck. But he also thought up the infield tarp and the concept of Ladies Day, which was devised to help counterbalance the roughhouse element of the game at the time.

Other blog stuff: The new blogger template designer has affected the color scheme in the blog banner. I'll continue to change the colors depending on the card, but some of the colors don't seem to be available anymore. I struggle to get the right color of pink. Yes, that's my life now, trying to find the right shade of pink.
Posted by night owl at 1:32 AM

Who cares about pink when you found the right "shade" of Bowman purple? I think Segui is perturbed about his future playing for the expansion M's.

Segui pitched for both Seattle expansion teams, the Pilots and the Mariners.