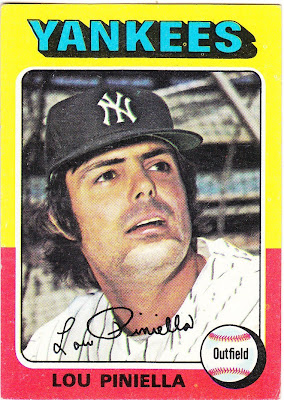 Card fact: This is Lou Piniella's first card as a Yankee, not counting the 1974 Traded card in which he's listed as a Yankee but not wearing a Yankee uniform.

What I thought about this card then: Not aware of it.

What I think about this card now: Topps went through a two-year run in which it featured Piniella in a super close-up photo. The photo on the 1976 card is even closer. Maybe Topps thought Piniella was a matinee idol. He seemed rather sloppy to me.

Other stuff: Piniella was the butt of our Yankee-hating family's jokes in the 1970s. He was one of the most despised Yankees of my childhood. His over-the-top behavior made him an easy target. He had a temper, and he sometimes let it affect him in games. He was as hyper when he became a manager, and he never seemed to be able to handle losing gracefully. I thought it amusing that he took the job with the Cubs, a team known for their losing. I'm convinced that Piniella has mellowed because I don't think there's any way the younger Piniella could handle working for an organization that hadn't won a World Series in so long. Hell, he couldn't deal with the Yankees losing in the midst of their 1970 Series championship run. 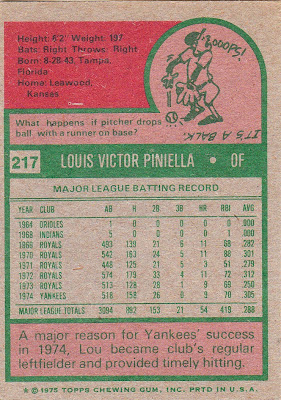 Back facts: I think I forgot to modify the scan, that's why it's light.

Other blog stuff: On this date in 1941, Lou Gehrig died of amyotrophic lateral sclerosis at age 37. Sixteen years earlier on this date, he replaced Wally Pipp in the lineup and did not miss another game for 2,130 contests.
Posted by night owl at 12:44 AM

High-strung doesn't even begin to describe Lou. I too was surprised when he agreed to manage the Cubs. Great reminder about Lou Gehrig.

Every time I see Lou I cant help but think of Sparky Lyle's revelation that he had a habit of rubbing his hair and then smelling his fingers. Someone in the lockerroom (possibly Catfish) once told him to "go smell your hair" during an argument.