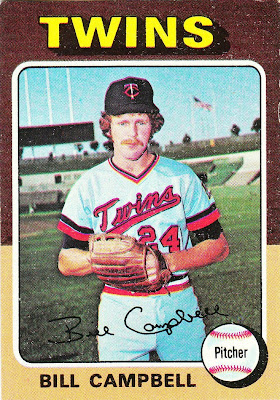 Card fact: This is the fourth card in the set to show the American flag in the background. The first three are: Dusty Baker, Ray Corbin and Jim Merritt.

What I thought about this card then: Never saw it. The first Campbell card I saw was his 1976 Topps card.

What I think about this card now: I think I need to upgrade. The notch on the right side bothers me. This is the only set where I am this picky.

Other stuff: One of the first big free agent signings is shown for the second straight card. Campbell enjoyed a terrific season as a reliever for the Twins in 1976 and signed with the Red Sox for the 1977 season. He again had one of the best seasons for a reliever that year. But then he developed arm trouble, and although he hung around until 1987, he was never the same. He did pitch in 82 games for the Cubs in 1983. 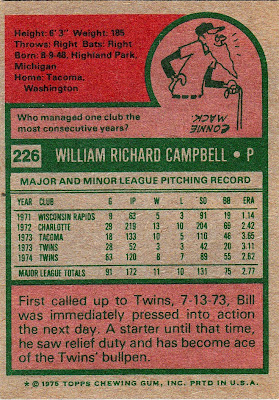 Back facts:  This is about the fourth cartoon that shows a guy with an enormously long beard. ... I didn't know that Campbell was exclusively a starter until being called up to the major leagues.

Other blog stuff: I've been slacking in charting all the powder-blue uniforms. I had to go back and find the ones I missed. All up to date now.
Posted by night owl at 1:05 AM

If I ever have a heart attack I sure hope I don't "immediately" get CPR "the next day."

I know I'm splitting hairs, but the write up on the back of the card just sounded funny to me.

Bill was the lone ex-Cardinal who didn't sign any autographs at the '85 Classic.

The American flag is appropriate for Bill Campbell's card. He served with the U.S. Army in Vietnam, as a radio operator.

That was quite a job...as the antennas often made nice targets for enemy snipers.

I think it's appropriate that I'm commenting on this card on Flag Day. Like Eggrocket, I found that writeup a little strange.