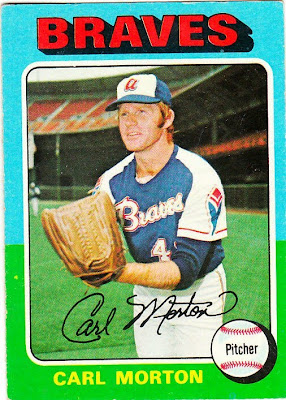 Card fact: This is another one of the cards that I pulled from a pack that I shoplifted from a drug store back in 1975.

What I thought about this card then: Some details of the shoplifting incident: The box with the packs of cards was sitting on an end cap directly across from the check out counter. How I was able to snag a pack of cards without the cashier seeing is a complete mystery. Later, I would tell my family that I found the cards on the sidewalk down the street from our house. Guilt set in shortly thereafter.

What I think about this card now: Morton's red hair matches with the seats at Candlestick Park. ... Hey, it's the first thing that popped in my head.

Other stuff: Carl Morton was one of the first stars for the expansion Montreal Expos. He won 18 games in 1970 and was named the National League Rookie of the Year. After two seasons that couldn't compare to his rookie season, Morton was traded to the Braves for Pat Jarvis. Jarvis did nothing for Montreal, but Morton put together a few good seasons for Atlanta before disappearing from the majors after the 1976 season. He was out of pro baseball by 1979.

Morton died four years later when he suffered a heart attack while jogging in 1983. 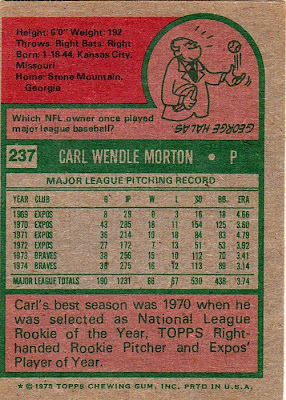 Back facts: I'm not so sure that Carl's best season was 1970. Sure, he won 18 games and his winning percentage was the best he had. Strikeouts were up there, too. But he led the league in walks in 1970. And his ERA was much better other years.

The cartoon is interesting because there appears to be an attempt to make the cartoon look like George Halas. That isn't the trend in other cartoons in this set. 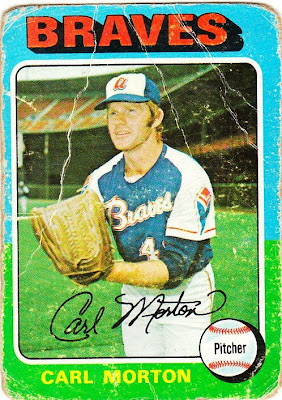 Oldie but goodie: That's the card I received under unpleasant circumstances. It's in rough shape.

Other blog stuff: Reader Eggrocket asked a couple posts ago how many players are featured in the cartoon on the back of their own card in the 1975 set. Well, I went back through the first 237 cards and eight players have received that honor so far.

Who says crime doesn't pay? It looks like the original Carl cracked under the strain of the guilt you felt. It's nice to have an upgrade, but the original, and the story behind it, are a good connection to your "wild" youth.

I think every kid must have had a shoplifting experience; I clipped a squirt gun, felt terrible, and never did the deed again. But I will not say I went so far as to go back and apologize...