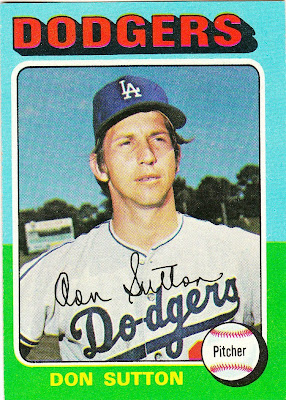 Card fact: This is the last card of Don Sutton in "pre-perm mode." Sutton features the new curly hair style on his 1976 card, and it's pretty much all curls from that point forward.

What I thought about this card then: Don Sutton was a big deal for a Dodger fan back then. I did not pull his card in 1975, but I did acquire it when I was still a kid, and it ranked right up there with my Cey and Garvey cards from this year.

What I think about this card now: The scoreboard in the background looks like something off a high school baseball field. Also, the photo is old. It's likely from 1972 as the Dodgers last wore those uniforms that year.

Other stuff: Sutton is one of my heroes of my adolescent years but it didn't start out that way. When he got into that scuffle with Steve Garvey, I was horrified. Later, I grew to be suspicious of Garvey and I sided with Sutton. Unfortunately, soon after that, Sutton left the Dodgers to sign as a free agent with the Astros. But I never rooted against him no matter what team he played for after that. Fortunately, he didn't play for any team I hated, and he returned to the Dodgers to finish out his career.

Sutton never played for the Braves, but he's associated with the Braves now more than he is with even the Dodgers (even though he's a Hall of Famer with the Dodgers, baby!) because of his long-standing broadcasting career with Atlanta. Sutton's a fine broadcaster. He was a better pitcher, but apparently he does a lot of things well.
(EDIT: Don Sutton died on Jan. 18, 2021 of cancer at age 75. *sigh*) 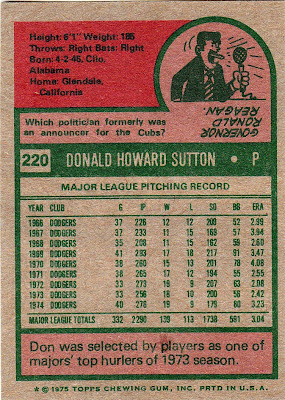 Back facts: It's appropriate that there is a broadcaster cartoon on the back of Sutton's card.

This cartoon has been in my head since I was a kid. I had no idea who Ronald Reagan was at the time, but I wondered why he seemed so angry while he was talking about the game. It's a rather animated cartoon.

Other blog stuff: On this date in 1989, Toronto's SkyDome opened and the Blue Jays lost to the Brewers. I was given tickets to this game but I had to work and couldn't give them away on short notice. I still have the tickets, unused, to that first game at SkyDome. But I get sad everytime I look at them.
Posted by night owl at 3:00 AM

If you were a radio announcer for the Cubs you might be angry as well.

I have to agree with Spiff.

I think that's the first non-perm card of Sutton I've ever seen. I've led a sheltered life I guess.