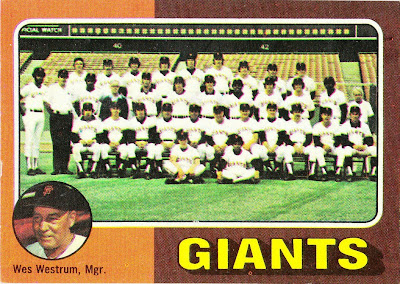 Card fact: Topps probably had to scramble to get a photo of Wes Westrum. He was named manager in mid-July of 1974, replacing Charlie Fox. Back then, Topps traditionally obtained photos of its subjects during spring training of the year before the cards were issued.

This was Westrum's second and last major league managerial job. He was the second Mets manager in the franchise's history, helping the team to its first non-last place finish ever in 1966.

What I thought about this card then: As I've mentioned many times before, thoughts about team cards were few and far between.

What I think about this card now: Giants. Ick. Why did they get a color combo that matches their team colors? Stupid Topps.

Other stuff: The third person from the left in row two is Bobby Bonds. But Bonds is airbrushed into a Yankees uniform in his 1975 card as he was traded to the Yankees during the 1974-75 offseason.

Back facts: This is the first opportunity to show both the back of a regular team card that you would pull out of a pack in 1975 and the team card that you received when you ordered the whole team card set through the mail. I still have that mail-order Giants card from '75. 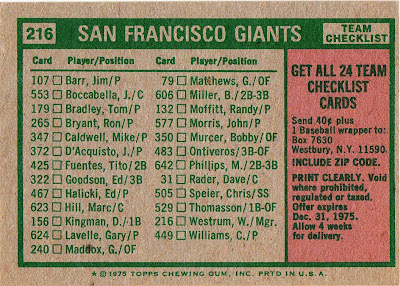 And now the back of a team card received through the mail order: 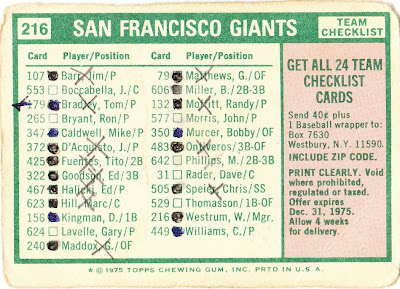 Aside from my 9-year-old checklist system, note the white card stock, which was much thinner, more like a note card.

Other blog stuff: Time to see how well Topps represented the 1974 Giants squad.

The Giants used 35 players during the 1974 season, which was one of several lousy '70s seasons for San Francisco. Topps featured 25 players from that 1974 season, including Bonds, airbrushed as a Yankee, and Ken Rudolph and Elias Sosa, both airbrushed as Cardinals. So there are just 22 Giants from the '74 team wearing Giants colors in Topps set (Topps did add Bobby Murcer and Marc Hill as Giants in the '75 set. Murcer, airbrushed awkwardly, was traded for Bonds after the '74 season and Hill was a rookie who didn't play for the Giants until 1975).

There are no notable '74 players missing from the set. John Montefusco, who pitched in just seven games, doesn't have a card. His rookie season would be '75. Steve Barber pitched in 13 games but his last card is from '74 Topps. Reliever Jim Willoughby pitched in 18 games, which is more than a couple of Giants pitchers who did have cards in the '75 set, but he doesn't have a card. Willoughby is shown as a Giant in the '74 set and then returns as a Red Sox in the '76 set.

So with 25 players featured from the '74 Giants in the set, that comes to 71.4 percent of the players. Here is where the Giants rank with the other teams shown so far:

That is way too much chocolate and vanilla. I'm holding out hope that the Rangers don't end up in last place on the team card rep list.