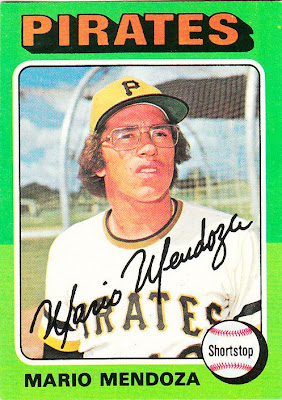 What I thought about this card then: Absolutely horrified by it. Aside from Bruce Ellingsen, it was the one card that neither my brother nor I wanted in our collection. I was fortunate enough not to end up with it. I think my brother got stuck with it.

A couple of years after this card came out, I became best friends with a boy named Mario. I'm sure I was a bit disturbed when I first found out his name.

What I think about this card now: Quite an impressive signature Mendoza has.

Other stuff: Mendoza was a good-fielding shortstop who played nine years in the major leagues despite a legendary inability to hit. The term "The Mendoza line," which refers to hitting below .200, is a reference to Mario Mendoza, who hit .215 during  his career, but had single-season batting averages of .118, .180, .185 and .198.

Mendoza says the player who came up with the term was Seattle teammate Tom Paciorek, although Paciorek blames Bruce Bochte. "The Mendoza line" became commonly used when George Brett mentioned it in an interview during his quest for .400 in 1980. ESPN's Chris Berman pounced on the phrase and the rest is history.

Mendoza, who played in the Mexican League before coming to the Pirates, ended his major league career in 1982 with Texas. He later played and managed in Mexico and also managed in the minor leagues. 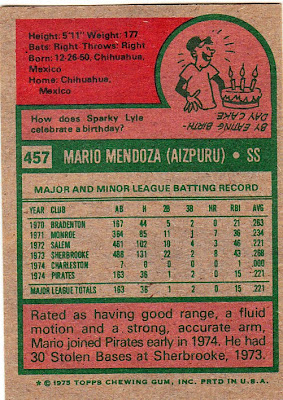 Back facts: I've already mentioned this cartoon and Sparky Lyle's "love" for birthday cakes on the other blog.

Other blog stuff: On this date in 1954, the Dodgers signed Roberto Clemente to a one-year, $5,000 deal with a $10,000 bonus, beating out several team eager to sign the outfielder. However, the Dodgers would lose Clemente to the Pirates in the Rule V draft the following year.
Posted by night owl at 12:51 AM

I always thought the Mendoza line was hitting your weight...

The Mendoza line as a reference to hitting your weight is considered one of the alternate definitions of the phrase. The more common one is hitting below .200.

It would have been interesting if Topps would have shown what Sparky really did with birthday cakes.

i heard the mendoza line being interchanged with .200, but i always thought it was whatever mendoza was hitting. this makes more sense to me, and i think i remember brett talking about looking for mendoza's average in the paper in that interview, not the .200 line.

Yes, that would make more sense, but it's more commonly thought of as the .200 line. I found it in several articles. Personally, I blame Chris Berman. He'll muck up anything.

At least Topps didn't say something in the write-up about his good bat like they did with Rick Dempsey.