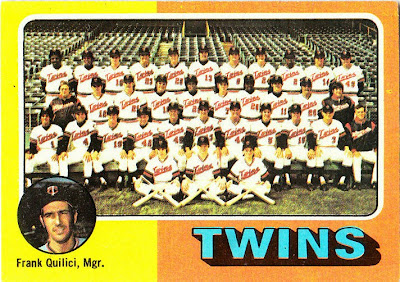 Card fact: This is the third orange-yellow bordered team card in the set. The first two -- the Phillies and Angels -- were way back in the early days of the blog.

What I thought about this card then: Nada. It was a team card.

What I think about this card now: I often wonder why team photos back then could feature bat boys, such as this one did, but now Topps has to put a fence up to obscure the bat boys. Is everyone that litigious today?

Other stuff: Frank Quilici was in the middle of a three-year term with the Twins. A former player with Minnesota who stopped playing in the majors after the 1970 season, Quilici briefly boosted a team that was slowly sliding out of its success of the 1960s and early '70s. But it didn't last. After the 1975 season, Quilici was replaced by Gene Mauch. 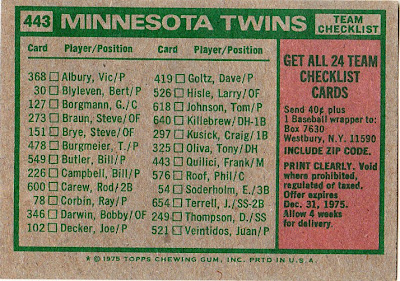 Back facts: There is a typo with the last card. Juan Veintidos is not card No. 521. That belongs to Expos pitcher Dennis Blair. Veintidos was on rookie card No. 621.

Other blog stuff: Where do the Twins rank in terms of how successful Topps was in reflecting the '74 team in its 1975 set?

Topps featured cards of 26 of those players. That includes pitcher Bill Hands and infielder Joe Lis, airbrushed into Rangers and Indians uniforms, respectively. It also includes Jim Holt, who is disguised as an Athletic in this set. And it includes Pat Bourque, who is shown as an Athletic -- not airbrushed -- even though he played most recently for the Twins in 1974 (more on that in card #502).

The most "overlooked" player was utility infielder Luis Gomez, who had 168 at-bats for the Twins in his first major league year and batted .208. Topps would give him later cards, though.

So here is where the Twins stand with the other teams in terms of percentage of players represented:


Yup. There is a new leader. The Tigers have led since the very first team card, but no more.
Posted by night owl at 1:13 AM

En espanol, Veintidos should have been card number 22.

Time to start catching up...a little at a time.

The Twins are my second favorite team thanks to my father and the fact that I was born in Minnesota I guess (we moved to Texas when I was a toddler.) I'm impressed you noticed the typo with the card number. That shows an intense study of the WHOLE card.