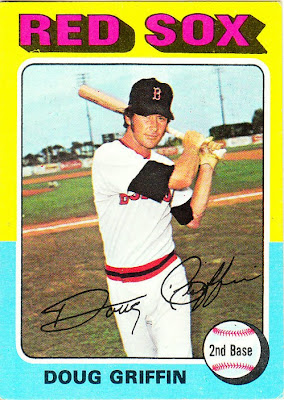 Card fact: One of two players in the set with the last name Griffin. The first one was featured back in May.

What I thought about this card then: I pulled this card in a pack I bought after a walk to the drug store with my brother. I remember this as quite a long walk, although it probably wasn't that long at all. But the extent of the trip was entirely along a busy street, which probably drove my mother crazy. Here was her 9-year-old and 7-year-old sons walking along a hectic street, flanked by businesses, a movie theater and a strip mall, all to get a few baseball cards.

Today, few parents would ever let kids that young head for the store without adult supervision. It sure was a different time.

What I think about this card now: It's nice to see a tilted field again. It's been awhile. Also, Doug Griffin looks rather nonchalant with his swing.

Other stuff: Griffin was a smooth-fielding infielder who spent most of his seven years in the majors with the Red Sox. He was acquired by Boston in 1970 in a deal that sent former Red Sox hero Tony Conigliaro to the Angels.

Griffin emerged as a surprisingly strong player for Boston and finished fourth in the A.L. Rookie of the Year voting in 1971. He had his best season in 1972 when he won the Gold Glove at second base. But Griffin was hounded by injuries throughout his career. He had back problems, but also couldn't avoid getting hit by pitches. His hand was broken twice (once by Gaylord Perry and once by Billy Champion). He was hit in the head by Nolan Ryan in 1974, which may have shortened his career. He also got beaned by Dick Bosman in 1975.

Griffin's playing time decreased in '75 when the Red Sox acquired Denny Doyle. By the postseason, Doyle had crowded Griffin out at second and was the primary starter in the '75 World Series against the Reds. Griffin retired after the 1977 season. He spent his post-baseball career in the construction business. 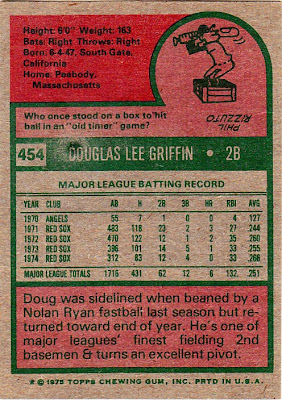 Back facts: There are always hijinks at old-timers games (not "old-timer" games). I wonder what made the Phil Rizzuto incident worth noting?

Other stuff: For the second straight post, let's take a look at the card that I pulled in 1975: 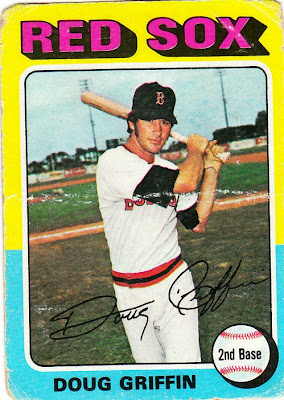 Not only did I survive that trip to the drug store, but this card survived the trip and everything else that's happened in the last 36 years.
Posted by night owl at 2:44 AM

I started collecting in 1981. Packs of Fleer and Topps were 32 cents. Every time we scraped up enough to buy a pack, we would race the two blocks to the local store and grab a pack. Every once in a while, my grandmother would give me a dollar and it was off to the store for a three pack of greatness.

It has been awhile since the last tilty background.