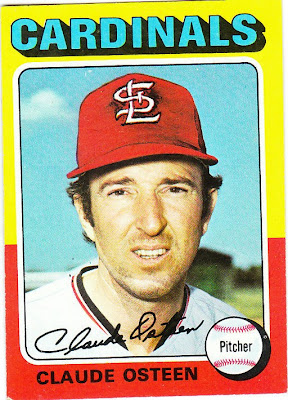 Card fact: Claude Osteen is airbrushed into a Cardinals cap as he was traded from the Astros to the Cardinals in August of 1974. He was also airbrushed into an Astros cap on his 1974 Topps Traded card after being traded in December of 1973 in the Jim Wynn deal.

What I thought about this card then: This is one of the cards that I pulled while on vacation in the summer of 1975. I remember liking it quite a bit and being totally oblivious to the fact that there was something funny about the cap he was wearing. I had no idea at the time that Osteen had spent a good bulk of his career as a consistently successful member of the Dodgers' rotation.

What I think about this card now: I'm wondering what jersey Osteen is really wearing. Dodgers or Astros? I'm going with Astros. That color on the jersey doesn't look too fake.

Other stuff: Osteen was a two-time 20-game winner for the Dodgers during a career that spanned from 1957-75. Other than the Cardinals and Astros, he also played for the Reds, Senators and White Sox. He was the key figure in the 1964 trade between the Dodgers and Senators that sent Frank Howard to Washington.

Osteen wasn't a big strikeout pitcher and gave up a ton of hits, but he was also a workhorse in the Dodgers' rotation, often incurring 30 decisions in a single season. He reached the All-Star Game three times. After his career, he became a pitching coach for several teams, including the Dodgers. 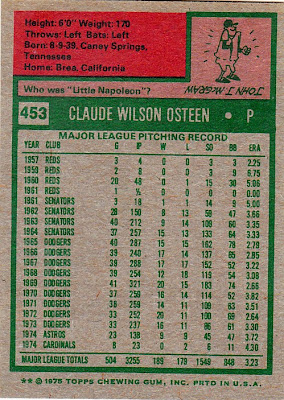 Back fact: That's a lot of stats. I like the half inning he pitched for the Reds in 1961.

Other blog stuff: Here is the original Osteen I pulled from that pack in the summer of '75: 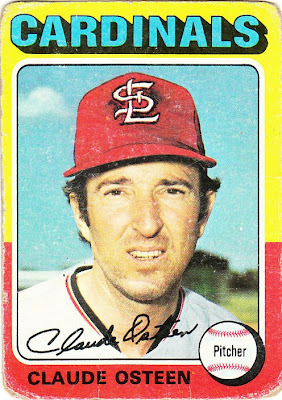 Still should've known the cap was airbrushed.
Posted by night owl at 2:36 AM

Half an inning. Funny. So he got somebody out and got a strike or two on the next guy.

I thought it was 1/2 inning too until I clicked on the image and got the big pic. Claude was the pitching coach in Texas when the new Ballpark opened back in 1994.