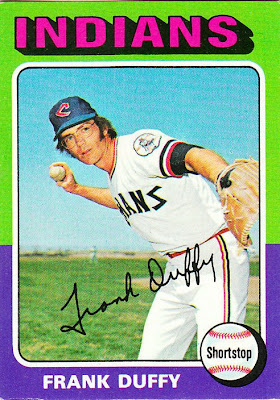 Card fact: This is one of the first cards that I obtained in both regular and mini version.

What I thought about this card then: My friend when I was a kid, Jennifer, never knew this, but Frank Duffy reminded me of her. But it's only because he had long brown hair and glasses just like she did. She'd probably kill me if she knew that, but I haven't seen her in over 25 years.

What I think about this card now: That is yet another poorly tended field behind Duffy.

Other stuff: Duffy's greatest success came during a four-year period as the Indians' regular shortstop. He also played for the Reds, Giants and Red Sox during a career that spanned the entire decade of the '70s. Not any earlier and not any later. He was another one of those good-field, no-hit shortstops of the '70s.

Duffy is probably most known as the player (along with Van Geishert) who enticed the Giants to trade George Foster to the Reds in 1971. 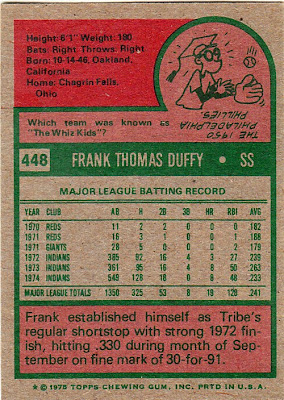 Back facts: I thought that was Duffy in the cartoon when I was a kid.

The '70s was bad news for the Indians. 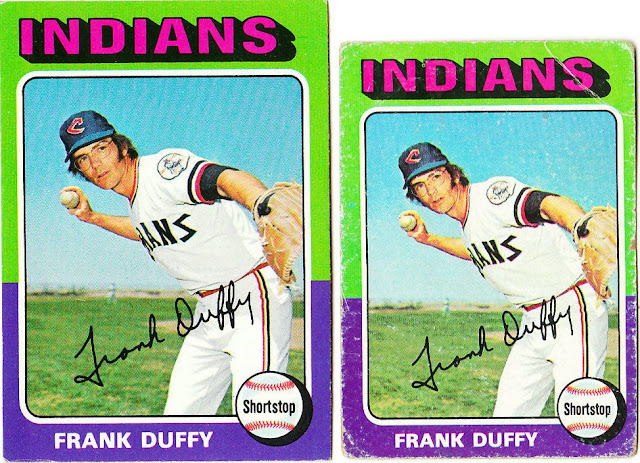 Oooh, level background and tilted player. I like it. Another qualifier for the "dude looks like a lady" subset. That mini has some nice character.