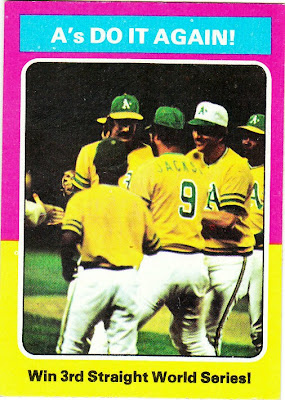 Card fact: The photo here appears to be from the end of one of the games in the 1974 World Series. It's difficult to determine which one since Rollie Fingers successfully closed out three of the four A's wins in the Series. I'm going to say it's from Game 5, which would have been the finale and the most appropriate.

What I think about this card now: Out of all the cards in the set, it seems the most hastily put together. Unlike the other cards in the postseason subset, there's no banner telling you it's the World Series, etc. Fortunately, the blurb at the bottom saves the day and mentions the Series.

Other stuff: Rollie Fingers was named the Series MVP after appearing in four of the five games. The A's, of course, were the last team to win three straight World Series until the Yankees won three straight from 1998-2000. 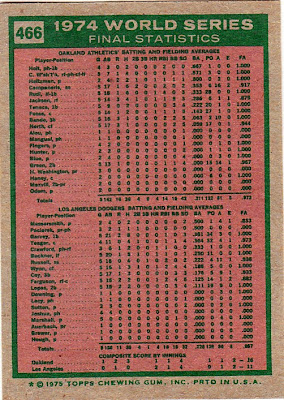 Back facts: Wow, that's a lot of stats crammed into a little space. I find it interesting that the pitching stats were not included, considering it was a pitchers' World Series. The Dodgers hit just .228 as a team and the A's were even worse, hitting .211.

Other blog stuff: That's the end of the postseason subset. Tomorrow we return to player cards, beginning with a stinkin' Giant.
Posted by night owl at 12:35 AM

I don't think it's Game 5. The last out of the WS was a chopper to Fingers' left that he fielded and flipped to first. He was then mobbed by his teammates and fans began streaming onto the field. This photo shows none of that. Maybe it's from Game 4? They wore yellow jerseys that night too.

is the bat boy Hammer

This might be a dumb question, but why is one guy wearing a different cap?

Now, I'll be humming "Can't Touch This" all day...thanks!

The A's coaching staff wore white caps during much of the '70s.

I love the different colored hats for the coaches. Kind of like the way firefighters have diffdrent color helmets for different positions (firefighter, captain, chief, public information officer, etc.)