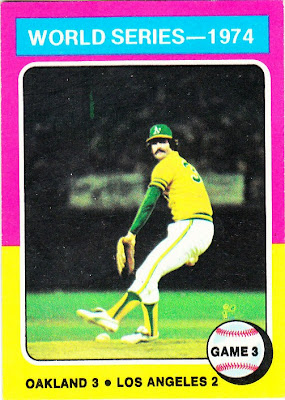 Card fact: This is the first of two appearances by Rollie Fingers in the World Series subset. He and Joe Rudi both appear twice.

What I thought about this card then: I didn't see it. I do have an older version of this card that I must have obtained when I was a teenager, but I have no idea where or how I got it.

What I think about this card now: Fingers is an excellent choice for this card. Not only was he important to this game, but he was the Series MVP, appearing in four games in the Series.

Other stuff: For the third straight game, the score was 3-2. This game was the turning point of the series. The Dodgers rocketed the ball off of starter Catfish Hunter and Fingers but only had home runs by Bill Buckner and Willie Crawford to show for it.

Meanwhile, Reggie Jackson hit a nubber off the end of his bat that catcher Joe Ferguson lunged for but watched glance off his glove for an error. Jackson who had thrown his bat away in disgust on the play, made it to first. Bill North scored on the play, the first of two runs scored in the third inning by the A's. Starter Al Downing gave up a run-scoring single to Joe Rudi in the next at-bat. The A's scored their third run the next inning when Bert Campaneris knocked in Dick Green who had walked.

The Dodgers, meanwhile, were busy unloading line drives directly at infielders, who turned them into double plays. Crawford hit one in the fourth and Steve Garvey in the eighth. Buckner's homer came in the eighth and after Hunter escaped the inning on Garvey's DP, Fingers came in for the ninth. Crawford hit a home run to start the inning and Joe Ferguson reached on an error. But Ron Cey struck out and Bill Russell hit into the Dodgers' third double play of the game to end it. 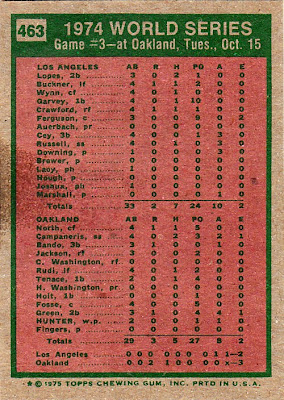 Back facts: The series moved to Oakland for Game 3 and stayed there since it lasted only five games.

Other blog stuff: Here is the older version of this card. But it isn't one I pulled in 1975. It's a mystery to me: 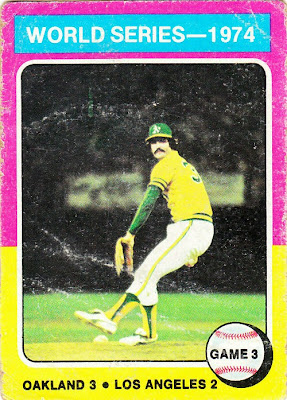 They got the border color half right. That second card looks like it might have been mis-treated by a Dodgers fan.