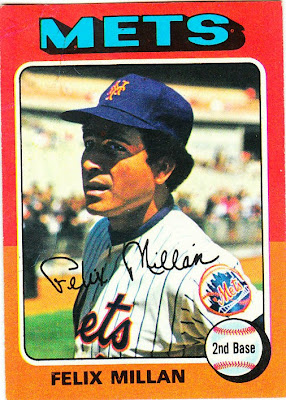 Card fact: I've mentioned before that I suspect Topps tried to match the border colors with as many A's as possible. I have also mentioned the same suspicion with the Mets. This is the 13th out of 18 Mets cards that has at least one of the Mets colors featured in the border.

What I thought about this card then: Oh, boy, this was one of my early favorites as a kid. The Mets held a special place in the collecting world then, and I gravitated toward Felix Millan for some reason. I saw this card, but I didn't have it.

My friend, the Mets/Yankees fan, had the card, and because of him talking about Millan incessantly, we became very familiar with Millan's habit of choking up on the bat. He brought his hands up very far up on the bat handle (he had 121 sacrifice hits in his career). It would be very comical to see that practice from a player today.

What I think about this card now: Millan looks like he just spotted his mother-in-law.

Other stuff: Millan was just what you wanted from your second baseman in the 1960s and '70s. He played in a ton of games, piled up a ton of at-bats and a ton of singles, and was a Gold Glove fielder.

Millan started out with the Braves and was their second baseman until after the 1972 season when he was traded to the Mets. Millan finished out his career as the Mets' starter at second, but it came to an abrupt end. During a game in August of 1977, he was involved in a brawl with Pirates catcher Ed Ott. Ott slammed Millan to the ground, injuring his shoulder and Millan would never play another major league game.

During the late '70s, Millan played in Japan. 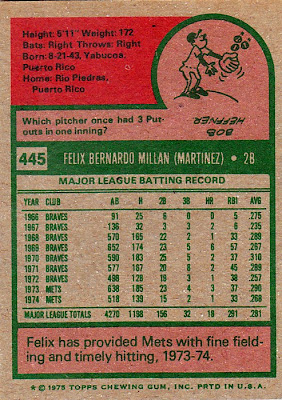 Other blog stuff: On this date in 1994, Michael Jordan signed a minor league contract with the Chicago White Sox.
Posted by night owl at 2:13 AM

What a sad way to end your MLB career. It was probably over something minor too. Still, I can't stand the Mets. I think the stink from the Yankees must have rubbed off on them.

There's definitely something wrong with Felix's eyes in this one. I've got this one and some other dudes with eye problems on my latest post:

I was actually watching the game with the Millan–Ott fight. What happened was this: Ott slid hard into second base on a double play attempt. Millan thought he slid too hard and made the mistake of hitting Ott in the face with the baseball. Ott, who they said was a high school wrestler, and, anyway was a catcher and you don’t mess with catchers, picked up poor, skinny Felix and suplexed him on the Three Rivers Stadium AstroTurf. I didn’t remember that it was Millan's last game. He was pretty much finished by that time anyway, and the Mets weren’t going to bring him back the next year (They had Doug Flynn by that time I believe) which really has more to do with it being the end of Millan than the fight with Ott. And I don’t remember if the Mets got the double play.