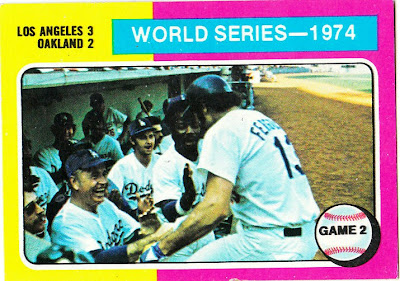 What I thought about this card then: Well, as the only World Series card that depicts the Dodgers doing something successful, I considered it my "shred of decency" card. If anyone would bring up the A's Series win in '74, I'd pick up this card and say, "Yeah, but who won Game 2?" Hey, it was all I had.

What I think about this card now: The card shows Joe Ferguson returning to the dugout after hitting what proved to be the game-winning home run in the sixth inning. It was a two-run shot that gave the Dodgers a 3-0 lead. I can pinpoint Walter Alston, Jimmy Wynn, Doug Rau and Davey Lopes (behind Rau) in the dugout, but I'm not 100 percent sure on the others. If anyone knows the other players, feel free to shout them out.

Other stuff: Ferguson delivered the big blow, but the other Dodger heroes were Don Sutton and Mike Marshall. Sutton held the A's scoreless for eight-plus innings, surrendering just two hits until the eighth. Then, when Sutton hit Sal Bando and gave up a double to Reggie Jackson to start the ninth, Marshall came in to do his thing.

First, Marshall allowed a two-run single to Joe Rudi that cut the Dodgers' lead to 3-2. Then he struck out Gene Tenace. That brought up pitcher John "Blue Moon" Odom. The A's put Angel Mangual in as a pinch-hitter and pinch-running "specialist" Herb Washington in at first, replacing Rudi. Marshall, who had an excellent pick-off move, snared Washington at first for the second out. He then struck out Mangual to end the game. 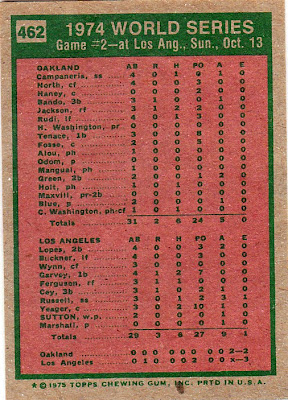 Back facts: Catcher Steve Yeager, who was a very light hitter, went 2-for-3 and drove in the Dodgers' first run.

I'm not caught up yet, but I had to comment now since I have this card. I got this one in a trade on the MCG site. The one Topps sends me probably won't be as nice as the one you have.

I believe its Steve Yeager immediatl;ey on Alston's left and Don Sutton in the ball cap with the frizzy perm coming out of it.