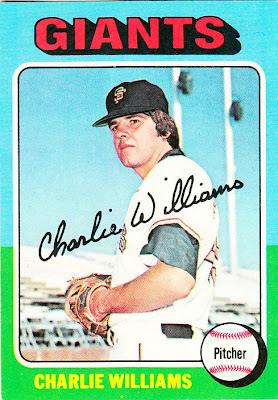 Card fact: This is Charlie Williams' first appearance on a Topps card since his Topps debut in the 1972 set.

What I thought about this card then: I didn't see it. The first card of his I saw was in the 1976 set. I would confuse him with another Giant, Randy Moffitt, only because they were both Giants relievers and photographed in the same spot down the right-field line in Candlestick Park.

What I think about this card now: I like the folding chairs in the background. It's a very sunny spring training photo.

Other stuff: Williams was almost exclusively a relief pitcher during his major league career from 1971-78. A New York boy -- he was born in Flushing -- Williams started out with the Mets. But he will forever be known as the player traded to the Giants straight-up for Willie Mays on May 11, 1972. (The Mets did throw in $50,000). 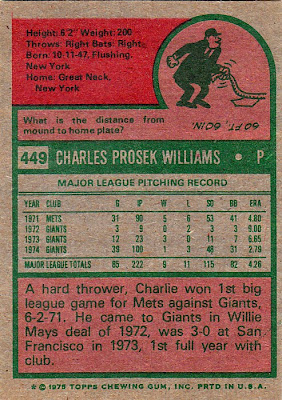 Back facts: I believe there's a typo in the cartoon. The answer should read 60 feet, 6 inches, not 60 feet, 60 inches. Also, "Prosek" is quite the middle name.

That's a busy background. Why all the folding chairs? That cartoon makes it an even 65 feet to the plate. I can't believe that got by the editor. I know, what editor? How would you like to be able to say you were traded for Willie Mays? Thus endeth the random comment.