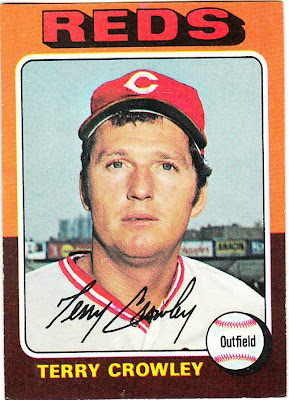 Card fact: Terry Crowley is airbrushed into a Reds cap and uniform. In fact, this is almost positively the same photo shoot that led to Crowley's 1974 Topps card when he was still with the Orioles. Crowley is pictured in Yankee Stadium on each card. You can see the Anacin sign in each photo.

What I thought about this card then: Didn't know about it.

What I think about this card now: Topps had quite a bit of time to get Crowley in a Reds uniform. He was acquired by Cincinnati in mid-March of 1974. I know the majority of the photos back then were from spring training. Perhaps Crowley didn't arrive in time for Topps' photographer.

Other stuff: Crowley was an outfielder/first baseman/designated hitter who is most known for his years with the Orioles. He started out with Baltimore before being acquired by Texas at the end of 1973 (he's featured as a Ranger in a 1974 Topps Traded card even though he never played for the Rangers). The Reds then picked him up four months later.

After a couple of years with the Reds and a very brief period with the Braves, the Orioles reacquired Crowley, and thus began the most successful portion of his career. Crowley was a key part of manager Earl Weaver's platoon system, and Crowley enjoyed his best years in 1979 and 1980 as a pinch-hitter.

Crowley ended his career in 1983 with Montreal and ranked in the top 10 in all-time pinch hits when he was done. He later became a hitting coach for decades for both the Orioles and Twins. It was recently announced that Crowley would not return to the Orioles as full-time hitting coach and work only part-time in the Orioles' organization. 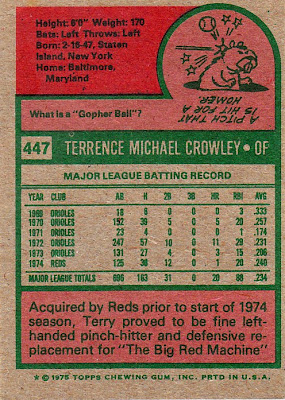 Back facts: I've often wondered when the phrase "The Big Red Machine" began. I always associated it with the 1975 and 1976 Reds teams, but I suppose it could have started as early as 1970 when the Reds reached the World Series.

Other blog stuff: This is the first orange-brown bordered card in 45 cards. It's still first overall, but let's see if it hangs on to No. 1 in the next couple of weeks.
Posted by night owl at 12:30 AM

Of course, "The Crow" was also photographed in Yankee Stadium for his excellent 1973 Topps card.

I had heard that the phrase "Big Red Machine" came from a quote from Pete Rose who was talking about the success of his team. But I don't know what year that was.

It's time to catch up. What a boring picture to start my catch-up speed commenting round. I have the '74 Topps Traded card. I know, big whoop.

The Reds became known as the "Big Red Machine" In 1970. They definitely had it by the World Series that year. It’s possible they had it before 1979, but I don’t think so because before 1970 there was no reason for them to have that name. They were just another mediocre middle of the table team till then.