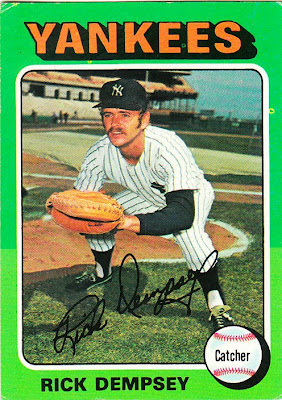 Card fact: This is the second straight card of a player who competed in four different decades. Rick Dempsey barely qualifies as he played in five games in 1969.

What I thought about this card then: I didn't see a Dempsey card until he was with the Orioles.

What I think about this card now: Well, for one, the upper left corner is bent. Secondly, Dempsey isn't in a full catcher's crouch, which makes me think that he's either illustrating when a catcher signals to a pitcher that he wants the ball thrown high, or the ground is wet.

Other stuff: Dempsey is known as one of the better defensive catchers of the last 40 years. He lasted as long as he did not because he could hit -- he couldn't -- but because of his ability to handle pitching staffs. His best success came with the Orioles when he won a starting role even with his limited hitting ability. He contributed to two Orioles World Series appearances and found his hitting stroke in the 1983 Series against the Phillies, winning Most Valuable Player honors.

Dempsey later played for the Indians, and then the Dodgers, where he was a backup catcher on the 1988 Series-winning team. He finished out his career with the Brewers and then back with the Orioles in the early '90s.

Dempsey got on my nerves as I was growing up, as most Orioles did. He was kind of a clown and when he first did that rain-delay act in which he impersonated Babe Ruth and slid on the wet tarp (I think it's appropriate that there is a tarp in the background of the photo on this card), I didn't think it was all that funny. But the TV stations did, and they played it over and over and over again. I think it was on "This Week in Baseball" for two months straight.

Dempsey since has worked as a color man on Orioles broadcasts (big surprise), and coached in the O's organization. He's been thought of as manager material for quite awhile. 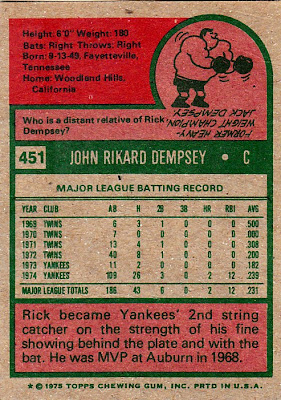 Back facts: The write-up grudgingly credits Dempsey for a fine showing with the bat, but there is no evidence in the stats.

Other blog stuff: On this date in 1995, the Dodgers signed Japanese pitching star Hideo Nomo, and a million card collections were born.
Posted by night owl at 4:11 AM

I didn't even know Dempsey was ever a Twin or a Yankee. I've only associated him with the O's. His "distant relative" Jack appears to have been using the cream and the clear.

Rick Dempsey's most famous exploit as a Yankee was knocking out fellow Yankee back up catcher Bill Sudakis I think in a clubhouse fight. It was a big story in New York at the time. Sudakis had the rep of being kind of a P. O. S., Dempsey was obviously a very belligerent type, and of course the star catcher, Thurman Munson, was a famously surly individual. So there was a lot of drama in the Yankee catching corps in their Shea Stadium era.