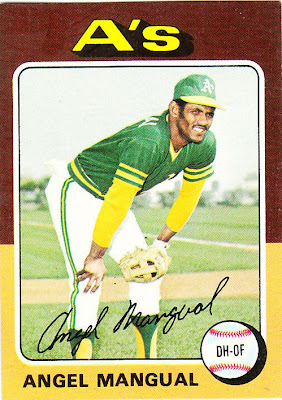 What I thought about this card then: I had the mini card. I don't recall thinking much about it, except that Mangual's brother, Pepe, made his solo card debut in the 1976 Topps set, confusing the heck out of me. I just assumed that Pepe was really Angel and proceeded to confuse the two brothers for the next few decades. I would also get them confused with former White Sox and Mets manager Jerry Manuel, who will also be featured in this set.

What I think about this card now: It seems strange for an A's player not to have a card with a green or yellow border. There are so few of them.

Other stuff: Mangual was a platoon-type player for the A's during their dynasty era. He was acquired from the Pirates in a trade for Jim "Mudcat" Grant and finished third in A.L. Rookie of the Year voting in 1971.

Mangual also delivered the game-winning pinch hit in the 9th inning of Game 4 of the World Series against the Reds in 1972. Mangual won three World Series rings with the A's, but didn't hit very well after his rookie showing. His career ended with the 1976 season. 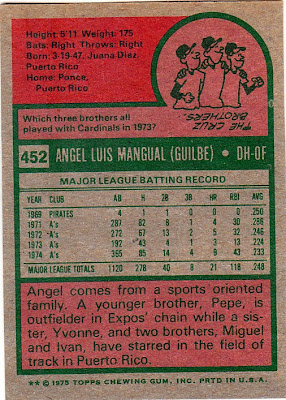 Back facts: Topps is keeping the family theme going by mentioning the Cruz brothers, Jose, Hector and Tommy, in the cartoon. Tommy Cruz played just three games for St. Louis in '73.

Other blog stuff: If you recall on the Willie McCovey post from two days ago, I wondered about the confusing cartoon.

Well, a reader has deduced that Topps may have mixed up the cartoon question and the answer. He said the question, which asked who was nicknamed "The Hat," seems to refer to Harry "The Hat" Walker. But the answer, which was "Jerry Lynch with 18," refers to former pinch-hitting great Lynch who had 18 pinch-hit homers in his career.

So I guess that means we need to be on the watch for a cartoon that asks "Who holds the record for most pinch-hit home runs in a career?" and answers with "Harry Walker." Wouldn't it be great if that happened?

Actually, I think the McCovey cartoon was a surrealist tribute.

You know the joke:

"How many surrealists does it take to change a lightbulb?"

Mangual, from what I read, was a frustrating player for the A's. He had talent, but didn't press himself.

But "Angel Mangual" had a very nice ring. I would have loved to hear Vin Scully say it (or Jon Miller now...)

Well, that's what I get for playing catch up. I found the answer for the Jerry Lynch question a few days too late. Oh well. I wonder if Angel has the highest percentage of rings based on number of years played.