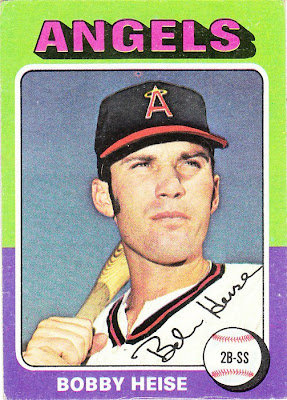 Card fact: Bobby Heise is airbrushed into an Angels cap. He was acquired from the Cardinals in a deadline deal in July of 1974. But Heise would be dealt to the Red Sox before this card even hit the streets.

What I think about this card then: This is one of about a dozen cards in the set that I have in OPC form.

Also I like how the facsimile autograph is positioned along Heise's jersey. It's as if he signed it himself!

Other stuff: Heise was a utility infielder who played in the majors for 10 years for seven teams. He is probably most known for playing for four pennant-winning teams, but never playing in the postseason. He was on the 1969 New York Mets, the 1971 San Francisco Giants, the 1975 Boston Red Sox and the 1977 Kansas City Royals.

This is the final card issued during Heise's career, even though he would play in '75 and '76 for the Red Sox and '77 for the Royals. After his career he became both a fire fighter and a police officer. 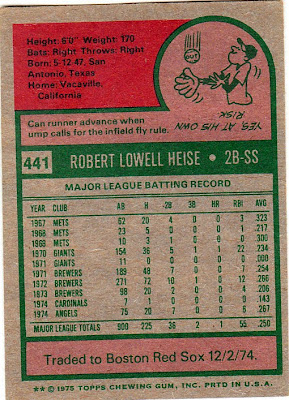 Back facts: There is the mention of Heise getting dealt to the Red Sox. It's basically Topps documenting its own failure. It went through all that effort to airbrush Heise as an Angel, and he ends up on the Red Sox roster in 1975.

Other blog stuff: On this date, 1970s blond bombshells Farrah Fawcett and Christie Brinkley were born.
Posted by night owl at 2:34 AM

"Robert Lowell"...hmmm. Do you think he's named after the Massachusetts-born poet?

If a player changed teams after the end of the season but before date #1, Topps would apparently show the player with his new team on the front of the card, and airbrush a photo if necessary. If it happened after date #1 but before date #2, Topps would not change the team designation or alter the photo on the front, but would generally mention the trade on the back. The latter practice could not have continued much beyond 1975, if at all, and the former had ended by the close of the '70s.

I'm surprised Heise didn't have any cards after this set. Although he didn't play much, he appears to have been on a major league roster all year in '75, '76 and '77.

Just once, will you show us the regular, mini AND OPC card together? Pretty please??

No way is that guy in the cartoon catching the ball holding his glove sideways like that.