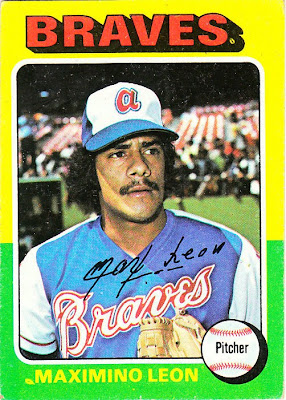 What I thought about this card then: I had the mini card. I remember not being impressed.

What I think about this card now: Well, first of all, terrific name, Maximino. But I totally understand abbreviating it to "Max" when signing.

Other stuff: Leon was a relief pitcher for the Braves for six seasons. He appeared in 50 games for the 1975 Braves.

Leon has just three Topps cards. Most of his career was spent in the Mexican League, and he was inducted into the Mexican League Hall of Fame in 1997. Leon also has worked as a pitching coach in the Arizona League. 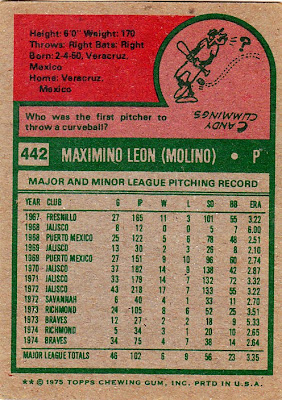 Back facts: I missed posting on Leon's birthday by ONE DAY! ACK! ONE DAY!

Other blog stuff: Since I'm on this run of mini cards, I should at least show the mini card and regular card side-by-side once in awhile: 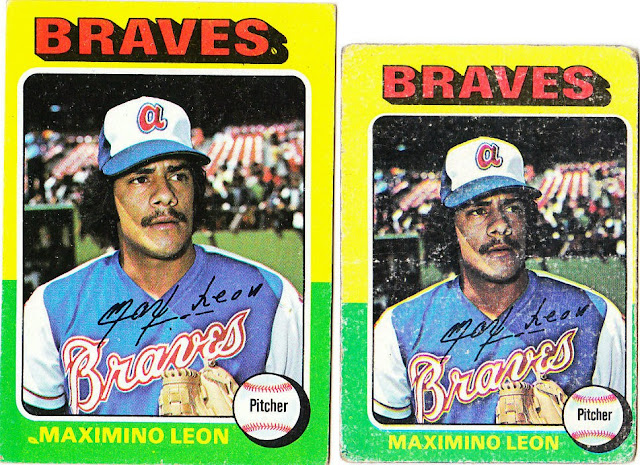 He looks a little cranky on both cards.
Posted by night owl at 2:09 AM

I thought I heard or read somewhere that Topps pulled the sigs for these cards from contracts they signed with the players. Do you know if that's true? It would have been nice to see Topps get the full name on the facsimile auto.

I've heard the same thing about Topps harvesting the autos. I can't remember where I learned that. Might've been "Card Sharks".