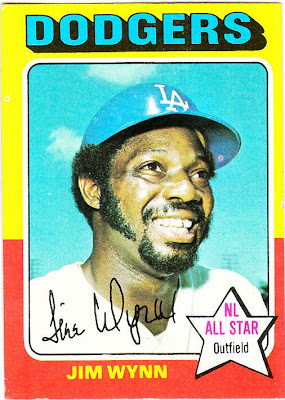 What I thought about this card then: This is another one of those cards that I saw for the first time in my trip to Cooperstown in 1975. It became one of my all-time coveted cards because I didn't obtain it for years. It was one of the last Dodgers I needed to complete the '75 team set.

What I think about this card now: It doesn't really look like Wynn. But I think that's just because his enormous smile in the photo. He was more serious-looking on most of his other cards.

Other stuff: Wynn came over to the Dodgers from the Astros in a deal that sent Claude Osteen to Houston before the 1974 season. Wynn bounced back from a miserable '73 season and helped the Dodgers reach the World Series in '74. He was named the National League's Comeback Player of the Year.

It was Wynn's last great season. He tailed off in '75 and was dealt to the Braves in the deal that gained the Dodgers Dusty Baker. Wynn closed out his career with Atlanta, the Yankees and the Brewers.

But before his arrival in L.A., Wynn spent 1963-73 as a hard-slugging center fielder for the Astros. Nicknamed the "Toy Cannon," he hit more than 200 home runs for Houston, a considerable feat since he played his home games in the monstrous Astrodome.

Wynn, who had his uniform number retired by Houston, now does TV postgame analysis for the Astros and does community work for the team. 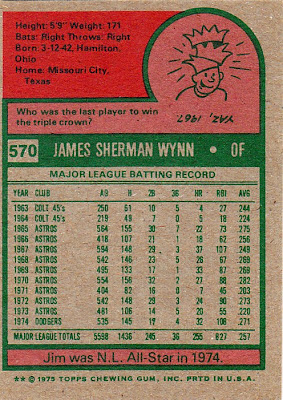 Back facts: Yaz remains the last Triple Crown winner. And Topps is just plain redundant with that blurb at the bottom (EDIT: Miguel Cabrera won the Triple Crown in 2012).

Other blog stuff: We have completed the entire N.L. All-Star starting roster with the addition of Wynn:

One of the very first baseball "facts" I learned as a kid was the one where Yaz was the last Triple Crown winner. At that time, it had only been about 11 or 12 years and I thought it would happen again at some point.

Wynn had an impressive set of sideburns.

Isn't Wynn's helmet an airbrush job on this card, too?