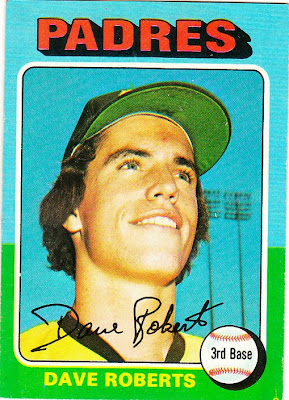 What I thought about this card then: Well, first of all, dude looks like a lady. Secondly, I had the mini card, and it might have been my least favorite card in the set. It didn't fall into the camp of cards that we made fun of without mercy. I just kind of silently loathed it.

What I think about this card now: Dude looks more like a dooood, than a dudette.

Other stuff: Roberts was a utility infielder for the Padres, and later the Rangers, Astros and Phillies. Roberts actually enjoyed a productive 1973 season when he was San Diego's third baseman, and the Padres thought they had something special. But he fell off drastically in 1974, was sent down to Hawaii (oh, the misery, sent down to Hawaii), and never came close to performing like he did in '73.

Roberts later played all over the infield, even taking some turns at catcher, while staying in the majors until 1982. 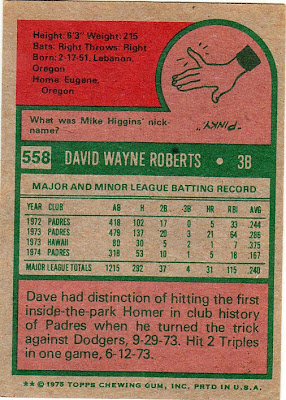 Back facts: I did not like the pinky cartoon. The womanly fingers just added to the whole dude-lady perception in my 9-year-old mind. And hitting an inside-the-park home run against the Dodgers? Dude, that is so uncool.

Other blog stuff: Suzi Quatro was born on this date 61 years ago. Folks who know the '70s know who she is. I'll let everyone else stumble across it.
Posted by night owl at 1:11 AM

The most feminine card in the whole set? Possibly.

Looking at the stats on the back, did he have his productive time in SD and THEN go to Hawaii in the same season? Or is that an error showing the time in Hawaii as 1973?

Roberts was sent down to AAA in 1973, but only for a short period; he appeared in just 22 games for Hawaii. I'm guessing that he began the season in San Diego, started slowly, was sent down, did better in AAA, then was quickly called back up, and played much better (at the major league level) for the rest of the season. Since he played for San Diego before he played for Hawaii, however, San Diego is listed first in his stats. From his game log on baseball-reference.com, it looks like he was absent from the major league club between late April and late May.

Roberts was the #1 overall pick in the June 1972 draft (MLB's main entry draft). He went straight to the majors, not playing in the minors until being sent down briefly in '73. Roberts' 1973 season didn't so much make the Padres think they had something special as much it confirmed that they already thought they had something special. But as Night Owl mentioned, he never had another year that even approached what he did in '73.

When I covered his '82 card, I wondered just how funny & awesome it would've been to hear the play-by-play guys when this Dave Roberts came up to bat against the pitching Dave Roberts. I can just imagine the hilarity..."The pitch from Dave Roberts is hit by Dave Roberts..". Sounds a bit like a Bugs Bunny cartoon.

I was a bi fan of this Dave Roberts.
Also of Suzi Qautro...nicely played there!