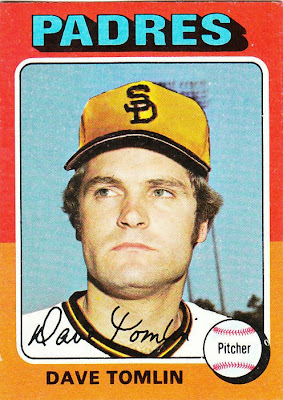 What I thought about this card: I didn't see it.

What I think about this card now: Tomlin is definitely airbrushed into a Padres cap and jersey (and doesn't look pleased). But with him not having a previous card (I want to say he was on one of those multi-player rookie cards, but I can't find an example right now), I'm wondering if he's actually wearing a minor league uniform or a Reds uniform, which is the team he was with before the Padres. I'm assuming it's a Reds uniform.

Other stuff: Tomlin was a career-long relief pitcher for mostly the Reds and the Padres from 1972-86. Even though he played 13 seasons in the majors, he had relatively few cards. They spanned from 1975-80.

This is mostly because after 1980, he appeared in only 14 more games with the Expos and Pirates. Before that, Tomlin appeared in 67 games in '75 and 76 games in '77 for San Diego. He was then traded to Texas straight up for Gaylord Perry. Perry went on to win the Cy Young Award for San Diego, while Tomlin was released in spring training and picked up by the Reds.

With Cincinnati in 1978, he went 9-1 but had a 5.78 ERA. Such was life with the Big Red Machine. Tomlin performed better in '79 and appeared in three postseason games for the Reds.

After his playing career, he became a pitching coach in the Expos and Braves organizations. Since 1996, he's been a coach and manager in the minors for the Red Sox. 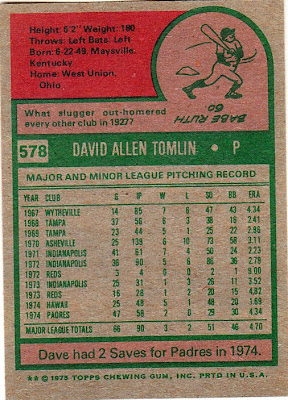 Other blog stuff: Two more key celebrities of the '70s were born on this date. Singer Carly Simon is 66. Comedian Jimmie "Dy-no-mite" Walker is 62.
Posted by night owl at 1:12 AM

It looks to me like he's at Shea Stadium in this pic. The omnipresent two pole light tower is a dead giveaway, so it's pretty likely that he's wearing a Reds uniform under the airbrushing.

What I love most about the '75 Dave Tomlin card is that he is without a doubt the single most trashed card in my entire collection. I don't know where I got it, or even if I did the damage to the card, but it looks a lot like I ran over it with a bike tire, or sat on it and slid down a grass hill. Then when I was done, it looks like I endlessly threw it against a wall so that every corner and edge was blunted and dull. Great card! Most of my '72 to '75s are like that, I guess it wasn't until summer of '76 that I started actually caring about taking care of my cards!

His card deserved that kind of treatment for the sole fact that he was traded by MY Rangers straight up for Gaylord Parry.