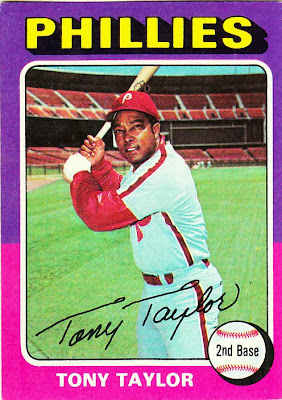 Card fact: Tony Taylor returns to the Topps set in 1975 after being omitted from the 1974 set. Taylor was released by the Tigers in early December of 1973, then signed by the Phillies two weeks later, probably too late for Topps to do anything about it for the '74 set.

What I thought about this card then: I didn't see it. But I do remember Taylor's last card, from the '76 Topps set. He seemed like a big man to me. But he was only 5-foot-9.

What I think about this card now: Looking at the '76 card, it appears that the '75 and '76 cards came from the same photoshoot.

Other stuff: Taylor was appearing on baseball cards way back in 1958. He came up with the Cubs, but was traded to the Phillies in May of 1960. He became an all-star later that year, and was a regular at second base or third base the next 11 years.

Taylor played for the Tigers in the early '70s, participating in his only postseason series in 1972. He returned to the Phillies to close out his career, working mostly as a pinch-hitter. I vaguely remember the 1976 NLCS and Taylor being added to the Phillies coaching staff because Dick Allen threw a stink about Taylor being left off the NLCS roster.

Taylor later did become a coach and worked as a manager for the Phillies in the minors during the 1980s. 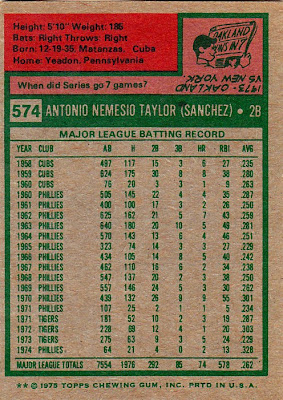 Back facts: Another card with lots of stats. There's been a rash of them lately. The cartoon makes almost no sense. Sure, the 1973 World Series lasted seven games, but it certainly wasn't the only one.

Other blog stuff: This is the first purple-pink bordered card in 47 cards. I would've thought this combination would be a contender for the overall title, but it's got to bust a move.
Posted by night owl at 1:16 AM

When did the Series last go 7 games? How many times has the Series gone 7 games? Those would have been better questions. Sometimes it looks like Topps just threw the questions together at the last minute.