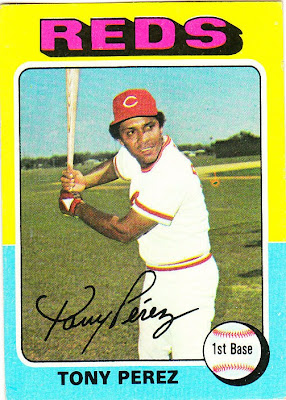 Card fact: Tony Perez's cards between 1972-75 are very similar and rather boring. However, I loved his 1976 Topps card, and the 1977 Topps Perez is phenomenal.

What I think about this card now: Already mentioned it. But I like Tony's signature.

Other stuff: Perez and the RBI went hand-in-hand during the 1970s. He finished second behind teammate Johnny Bench in total RBIs for the 1970s. He is 27th all-time in career RBIs with 1,652.

Perez was considered the heart of the Big Red Machine teams of the 1970s by manager Sparky Anderson. While Perez was with the team, Cincinnati went to the World Series four times and won in 1975 and 1976. Although I always knew him as a first baseman, Perez broke through the Reds lineup as a third baseman. He started at third between 1967-71 as Lee May played first. Perez then moved over to first when May was traded to Houston in the Joe Morgan deal.

Perez was traded to Montreal after the Reds' Series title in 1976. The Reds received two pitchers, Woody Fryman and Dale Murray, from the Expos. Perez continued to be productive with Montreal, and then with Boston after signing with the Red Sox as a free agent. But Cincinnati wouldn't return to the World Series after Perez's departure (until 1990). Many believed Perez's departure was too much for the Reds to overcome.

Perez returned to the World Series (along with Morgan and Pete Rose) in Philadelphia in 1983. He then spent his final three seasons back with the Reds. He was elected to the Hall of Fame in 2000. 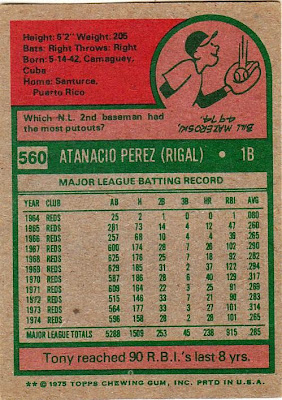 Other blog stuff: The best part of having the '75 set in a binder is that it is so colorful with all of the various borders shining back at you. Because of that, I never liked it when back-to-back cards featured the same border color as Tony Perez and Bob Montgomery do.

But I'm enjoying it on the blog. I don't have to change the color settings on the header.

I was interested in how Tony's 1970 season stacked up Triple Crown wise. He was 2nd in RBIs, 3rd in homers and 7th in batting average. He wasn't really close to the top in average as Rico Carty hit .366.

Hello,
I stumbled across this blog after I was researching a little about the set itself, and noticed on my 1975 Topps Tony Perez that his real first name is spelt wrong. Because of that, has this card ever been considered an "error card". Just a little thing I noticed and began to ponder and wanted to know if anyone had a similar question or maybe an answer to it. Thanks, any information is much appreciated.