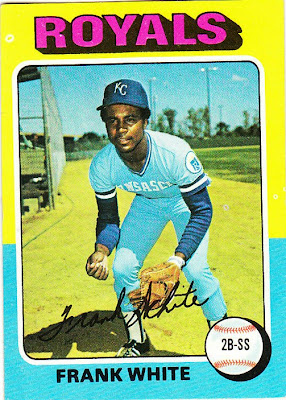 Card fact: This is Frank White's first solo card. That's the third straight card in which that is the case. However, this is not White's rookie card. He appeared on a four-player rookie card in the 1974 Topps set.

What I thought about this card then: I didn't see it. But, like most Royals of the period, I associate him with my friend Jeff from Kansas. White was another favorite of his. Those 1976 Topps Royals were hard to keep because Jeff was always after them. Who knew that in upstate New York I'd have a tough time holding on to Royals cards?

What I think about this card now: White is listed as being 5-foot-11, but he looks as short as teammate Freddie Patek in this photo.

Other stuff: White played all 18 of his major league seasons for the Royals and is still with Kansas City as a color commentator.

White came with Kansas City in 1973 and after some early struggles offensively, became a mainstay in the infield, winning the Gold Glove eight times and playing in the postseason for the Royals seven separate years. White even became a solid offensive player, showing some power in the mid-80s by slugging more than 20 home runs in 1985 and 1986.

White's number 20 was retired by the Royals. He later worked as a coach before moving into the Royals' front office for several years. He now works on Royals broadcasts. 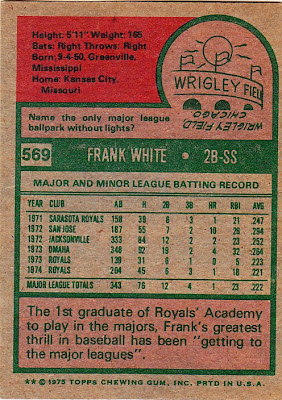 Back facts: White's graduation from the Royals Academy is mentioned on several of his baseball cards. The Royals Academy always fascinated me. I envisioned it as an actual school where players would attend classes and learn nothing but baseball. But actually it was not much more than Kansas City setting up a complex in Florida in which it would teach fundamentals and life skills to up-and-coming ballplayers who maybe weren't top prospects. It lasted only from 1971-75 before closing up shop. White and U.L.Washington are its most famous graduates.

Other stuff: A happy 85th birthday to former Brooklyn Dodgers great Don Newcombe.
Posted by night owl at 1:04 AM

Boy, that cartoon is kind of a giveaway, huh?

Around KC, the Royals make it seem like Frank White was the only graduate from their academy. I guess U.L. Washington's career wasn't as aah inspiring as White's.

I think I was 20 years old before I realized the Kansas City was the one in Missouri and not Kansas. If it weren't for the '85 series, I might still think it!

Frank White was always one of my favorite guys to watch. A poor man's Cal Ripken.

The Baseball Academy wasn't about prospects. They took guys who excelled in other sports and taught them to play the game.

Frank White was a college sprinter. The others were footall playrs, basketball players, etc.